Tomorrow night — June 30, 2012 — the world's official timekeepers will add a leap second for the first time in 3½ years. 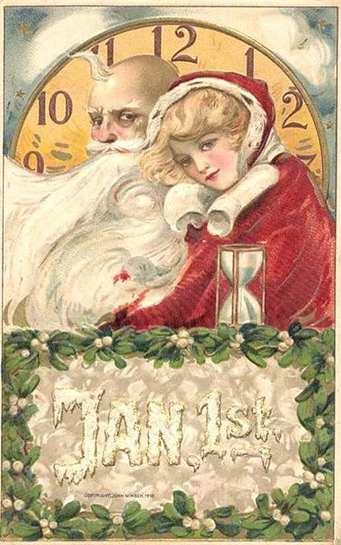 Arrival of each New Year evokes thoughts of Father Time, as in this postcard from 1910. Since 1972, most leap seconds have also been added on New Year's Eve. But in 2012, as in 1997 and a few others, the leap second is being added in midyear instead.

Anyone who'd like to "feel" the Earth slowing down can do so on Saturday evening, June 30, 2012. The final minute before midnight Greenwich Mean Time will contain 61 seconds — an adjustment needed to bring the world's clocks back into sync with Earth itself.

This is the first occasion in 3½ years when a "leap second" has been necessary, and only the third time since the start of the new millennium. In contrast, seven leap seconds were added during the 1990s — a clue that the slowdown is neither regular nor predictable. (Tidal friction within the Earth is the main cause, but there are fluctuations due to shifting proportions of water in the polar and equatorial regions and other factors.) For more on the purpose and history of the leap second, see this U.S. Naval Observatory press release or this more technical discussion.

Should leap seconds be abolished? Since 2003 the International Telecommunication Union (ITU), a United Nations agency, has debated doing just that. Communications engineers say it would simplify time distribution around the globe. But most astronomers favor the current (and time-honored) link of clock time to the Sun, which occasional leap seconds help to maintain. With member countries unable to agree, the ITU decided in January to revisit the issue in 2015.

How To "Observe" the Leap Second

The June 30th leap second will be inserted into the very last minute before Greenwich midnight, which corresponds to 8 p.m. Eastern Daylight Time (or 5 p.m. PDT) in North America. You might try listening to the Naval Observatory Master Clock by calling 202-762-1401 or visiting online — but good luck getting through if too many people have the same idea.

It's easy to lose count if signal reception fades, so I prefer to tie a small weight to a string 39 inches long and let it swing from a nail over an open doorway. I adjust the string's length (a slip knot helps) until the weight makes exactly 60 swings, back or forth, during a normal minute. Then, in the final moment before the witching hour, the weight will make one more jog and start the hour with a swing in the opposite direction.

It's an interesting problem, that our clocks have become more accurate than the phenomenon they were originally created to measure and record, the movement of the Sun through Earth's sky. I understand how frustrating the lazy irregularity of Earth's rotation and orbit around the Sun can be for some engineers and scientists in particular disciplines, but for the rest of humanity, time is inextricably related to observable phenomena: the rising and setting of the Sun, the cycle of the seasons, etc. If, rather than coalescing out of a cloud of gas and dust, the solar system had been designed by an engineer, all the planets' orbits would be perfectly circular, and the Earth's axis of rotation would be exactly perpendicular to the plane of Earth's orbit around the Sun. And the world would be a much less interesting place to live!

[paragraph break] On a serious note, I wonder why we don't use leap minutes rather than leap seconds. The Earth's elliptical orbit already causes the Sun to appear to move up to 15 minutes slower or faster than mean solar time. An additional variance of one minute from true mean solar time would not be a problem for the average person, and correcting clocks by one minute once or a couple of times a century would be much easier for the engineers to keep track of than these continual one-second corrections. And a leap minute would be much bigger news than a leap second. The media could make a big deal out of it, and people could plan extremely brief parties during our extra minute.

You're sooo funny, Anthony! (...apart from the factual stuff). You know, I think you suffer from a terrible deficit: can't you party just for a second!? Does it always have to be so overly extensive! An entire minute! You just have to know when to stop :-].

Man, we watched it at the http://tycho.usno.navy.mil/what.html website at 5 p.m. PDT on 6/30 as suggested in the article, and the second was not added on the site. 🙁 ---------------[[ Shelly: I was doing the pendulum/shortwave thing, so I wasn't watching the Master Clock site at the exact top of the hour. However, by comparing the Master Clock site with a wristwatch (non-atomic), a few minutes before the hour and then a few minutes after it, I can tell they definitely added the leap second. / Roger ]]

I hear that quite a few Web sites went down Saturday night, unable to cope with the added second. One notable exception was Google, which spent the day slewing their clocks by a total of one second, rather than jumping all at once. It's interesting to see how delicate the Web really is! Any reports of GPS problems? Are High Frequency Traders and other financial scum still campaigning against Leap Seconds?