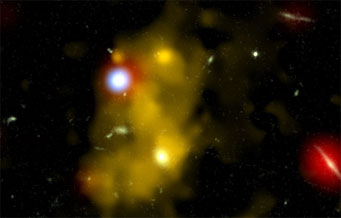 Cosmologists already knew the big picture. In the several hundred million years after the Big Bang, matter in the expanding universe began falling together into clumps; littler clumps within the clumps fell in on themselves to form the first stars; and many of the original clumps eventually coalesced into bigger pools to make modern-sized galaxies.

But why did galaxies come out the size they did, rather than staying small or growing indefinitely huge? Astronomers have new insight on this question thanks to images obtained in 2007 by NASA's Chandra X-ray Observatory and released to the public today.

Scientists have known for nearly 10 years about gassy objects in the early universe called “Lyman-alpha blobs.” They’re named for their emission of ultraviolet light at the Lyman-alpha wavelength given off by hot hydrogen atoms. The energy to make the blobs light up must come from somewhere. In a paper to be published in the July 10th Astrophysical Journal, a team describes observing a region of Lyman-alpha blobs called SSA22 about a half million light-years in diameter. They say they have found why the blobs shine and have also turned up a correlation between the blobs and active black holes at the center of galaxies within them.

Massive black holes exist in most galaxies, but only some of the holes are consuming matter fast enough to light up brightly. Co-author Jim Geach (Durham University, UK) says 1% to 10% of galaxies in general have an active-black-hole nucleus, but the percentage is five times higher among the early galaxies with Lyman-alpha blobs surrounding them. These are large galaxies in the late stages of formation, seen when the universe was only about 15% of its present age. By then the holes in question had grown very massive, to roughly a billion solar masses.

Apparently, when we see a Lyman-alpha blob we are seeing the blaze from these black holes (and perhaps from nascent stars) heating a galaxy’s remaining gas and driving it off into intergalactic space, thereby preventing it from coalescing into new stars. In other words, we’re seeing galaxies at the point when they shut off their own growth.

Theorists modeling the early universe have been eager to observe this crucial “feedback” stage in galaxy evolution. The feedback mechanism explains the strong correlation between the mass of a galaxy’s central bulge of old stars and the mass of its central black hole (the ratio is always about 700 to 1). The growing flood of radiation from the growing black hole blows remaining gas out of the galaxy — both preventing the galaxy from forming new stars and preventing the hole’s further growth. (The gassy disk of a spiral galaxy, full of younger stars, would be the result of new material falling in later.)

This transition stage should be brief in cosmic terms, which is why it has been hard to catch in progress. But the research team suspects that nearly all galaxies should go through it.

Valerie Daum is an editorial intern at Sky & Telescope.

And, as Dave Barry might ask, wouldn't "The Lyman-Alpha Blobs" be a great name for a band?