A group of 90 people from around the U.S. and the world joined S&T in early April for an aurora adventure in Iceland.

After last week's Boston Marathon bombing and aftermath — tragic events that all took place within a few miles of the S&T editorial offices — it gives me solace to think back on the recently concluded S&T Iceland Aurora Adventure. 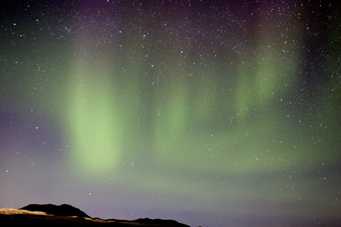 Faint aurora borealis shimmers over the mountaintops in Iceland.

A group of about 90 people flew into Keflavik International Airport on Sunday, April 7th. The folks in our S&T tour group came from all over the U.S., and we also had contingents from Canada, Brazil, and several other nations. The group bonded quickly, and it was wonderful seeing people make new friends and acquaintances. I didn’t get an exact count, but many of the people in our group also participated in earlier S&T trips to the Pacific, Hawaii, Chile, and Australia. It was great to be reacquainted with these friends!

The overall pattern for the week-long tour was established quickly. We gathered around 10 a.m. in the lobbies of our two hotels in downtown Reykjavik. We rode two buses to various daytime tours. After a full day of activities and dinner, we would congregate around 10 p.m. for bus rides to remote areas for nighttime aurora viewing.

"Iceland was a great place to discover. We thought we were going to an isolated land, but we found a completely organized society," says Claude Baril, who joined the tour group from Québec, Canada. "A small, dense population has adapted in perfect harmony with their environment." 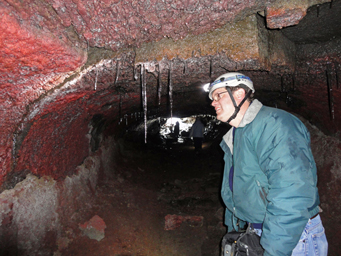 The daytime excursions included city tours of Reykjavik (a beautiful, modern city with world-class shops and restaurants); the famous Golden Circle tour to waterfalls, geysers, and a rift valley where the North American and Eurasian tectonic plates are splitting apart; and the South Shore tour of spectacular waterfalls and important cultural sites. During this trip we stopped at a small museum and met two Icelandic survivors of the Eyjafjallajökull volcanic eruption of 2010, which shut down air traffic over Europe for many days.

On Wednesday, the group enjoyed optional daytime tours. I went with a small group to explore a cave (actually, the term “lava tube” would be slightly more accurate). This was particularly interesting for me, since just a few weeks earlier I had edited the cover story about caves on the Moon and Mars for the April issue of S&T.

For some of the nights we actually had reasonably clear skies for aurora viewing, but the Sun refused to cooperate with storms powerful enough to trigger northern lights. But on Thursday night, the next-to-last evening before our departure, we left our restaurant in the small coastal village Eyrarbakki after dinner and were treated to a spectacular green auroral curtain to the north. We later drove to darker sites. By that time, the aurora had faded a bit, but was still easily visible and covered much of the sky. We were mesmerized as the aurora literally changed shape moment to moment. Although not much color was visible to the naked eye, many people in our group captured vivid greens and reddish hues with their cameras. 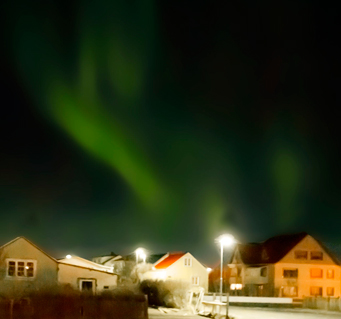 Tour participant Thomas Grollman took this shot of the green aurorae that surprised the group when they left a restaurant on Thursday night.

"After four nights, our wishes came true," Baril says. "We saw auroras, maybe not the biggest and brightest, but they were there. We finally accomplished our mission."

We also saw auroras the following night. The displays were not as impressive as those on the previous evening, but people still managed to take beautiful photos, and it felt like icing on the cake to conclude the trip with consecutive nights of northern lights.

I want to thank all of my traveling companions for such a pleasant experience. And I want to particularly thank Gary Spears and his colleague Tom Reynolds from S&T’s travel partner Spears Travel for putting together such a well-organized and smoothly operating tour. The hotels and restaurants they booked in advance were uniformly excellent. Last but certainly not least, I want to thank our two main Icelandic tour guides, Elin Konradsdottir and Steinunn Harðardóttir, for their warmth, expertise, and storytelling. 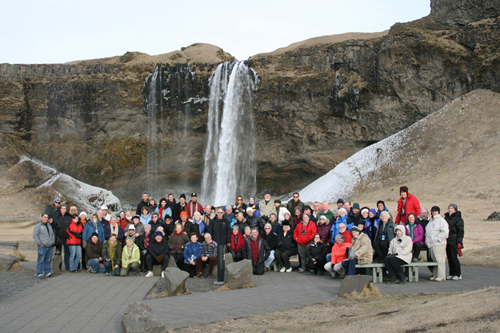 Part of the S&T Iceland tour group poses at Seljalandsfoss, one of the most famous of Iceland's many waterfalls.

Interested in joining us on a future trip? We're already planning a journey to warmer climes to see November's fleeting total solar eclipse in Kenya. Read more about our Kenya trip here.

I love the photo of aurora borealis.
Maybe you like my blog at http://www.iceland-information.com

It was a pleasure to visit Iceland and to meet Bob and the other folks on the trip. Iceland is a beautiful, magical land, with a fascinating history and a proud culture. All the Icelanders we interacted with were consistently friendly, helpful, and proud of their country. One thing Bob didn't mention in his report: On Thursday April 11 there was an M-class solar flare with a coronal mass ejection pointed straight at Earth. Spectacular auroral displays were predicted for Saturday and Sunday nights April 13 and 14. Unfortunately we were scheduled to leave on Saturday afternoon, so we missed the show. As Bob said, we saw some auroras the previous two nights, so that was some consolation.