A team flying a balloon-borne instrument 120,000 feet (37 km) over Antarctica has resolved yet another type of cosmic background radiation and tracked it back to its source. 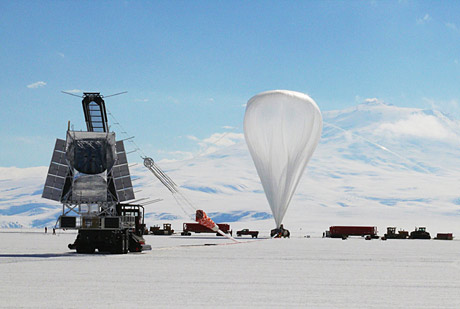 BLAST is readied for liftoff at McMurdo, Antarctica. The south polar continent is uniquely suited for balloon experiments that need to get above most of Earth's atmosphere for long periods at a time. High-altitude winds carry payloads around and around the pole for weeks on end, regularly bringing them back near their starting points and avoiding problems with international borders.

"Backgrounds" are emissions that are seen coming from the entire surface of the sky. The most famous is the microwave background from the hot gas that filled the universe 380,000 years after the Big Bang.

As tall as a 33-story building, the balloon with its 2-ton payload rises up and away.

Other backgrounds in infrared light, X-rays, and gamma rays have proven to originate from later, but still extremely distant, astronomical sources that are too faint and numerous to resolve individually in most cases. Last January radio astronomers announced finding a new background at longer wavelengths that they can't yet explain.

Now another one of the all-sky glows has been matched to swarms of faint, individual objects far, far away. After two years analyzing data from the Balloon-borne Large-Aperture Sub-millimeter Telescope (BLAST), astronomers from Canada, the U.S. and the U.K. say they've accurately gauged the "submillimeter," or very-far-infrared, background at wavelengths of 0.25, 0.35 and 0.5 millimeter (1200, 860, and 600 GHz). These wavelengths lie in the poorly explored spectral range between long-wavelength infrared light and the shortest wavelength (millimeter-wave) radio.

The radiation turns out to be just what was expected: the redshifted infrared glow from thick dust in young star-forming galaxies early in cosmic history. These are the so-called ULIRGs, Ultra-Luminous InfraRed Galaxies, discovered in the 1980s and 1990s. They blazed with furious star formation some 7 to 10 billion years ago (at redshifts of about 1 to 4). These galaxies were tumultuous masses of nebular gas and opaque dust spawning stars at some 100 times the rate at which stars are forming in the Milky Way today.

"Stars are born in clouds of gas and dust," explained University of Toronto cosmologist Barth Netterfield in a press release. "The dust absorbs the starlight, hiding the young stars from view. The brightest stars are the shortest lived, and many never leave their stellar nursery. However, the warmed dust emits light at far-infrared and submillimeter wavelengths," typically at a temperature of about 30 kelvins (30° C above absolute zero).

In fact, the team estimates that half of all the starlight emitted throughout cosmic history (including light reprocessed into longer wavelengths by absorption and re-emission by dust) exists as the far-infrared background from those early starbirth galaxies. The group used observations at much shorter infrared wavelengths from NASA's Spitzer Space Telescope to confirm that ULIRGs and the source of the far-infrared background are one and the same. 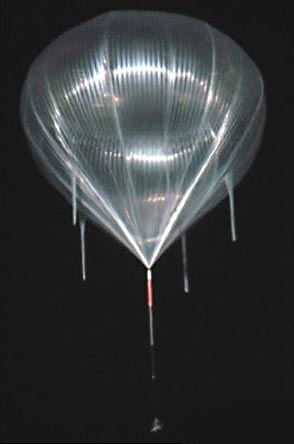 BLAST hangs from its fully expanded balloon at a cruising altitude of 23 miles. This high, the daytime sky takes on some of the blackness of space.

"The history of star formation in the universe is written in our data," said Mark Halpern (University of British Columbia), "and it is just a taste of things to come."

BLAST, with its 2-meter telescope, has acted as a pathfinder for the SPIRE (Spectral and Photometric Imaging Receiver) instrument on the upcoming Herschel Space Observatory, which is currently scheduled for launch on May 6th. Herschel, a 3.5-meter far-infrared scope, will be the largest telescope launched into space. It's written up in the May Sky & Telescope.

BLAST is also highly capable of studying the earliest stages of star formation in our own Milky Way Galaxy. Among several companion papers, the BLAST collaboration has released a study from the largest survey to date of the earliest stages of star formation. The study documented the existence of a large population of dense, cold cores in gas-and-dust clouds; many of these have cooled to less than 13 kelvins. These cold cores, which persist for millions of years, can contract and become the birthplace of stars.

The history of stellar formation is quite fascinating. It's truly amazing what balloon-borne telescopes like BLAST are able to reveal about the history of our cosmos and our own galaxy.

"In fact, the team estimates that half of all the starlight emitted throughout cosmic history (including light reprocessed into longer wavelengths by absorption and re-emission by dust) exists as the far-infrared background from those early starbirth galaxies." So what we are seeing is only half the picture. Interesting.

Seems the arXiv.org server got âblastedâ today (Fri 4-9-09) as the first 8 papers are from or relating to the new BLAST results! My favorite was paper 4 entitled âA bright submillimeter source in the Bullet Cluster (1E0657-56) field detected by BLASTâ : http://arxiv.org/PS_cache/arxiv/pdf/0904/0904.1203v1.pdf . Just more, useful information on this pivotal galaxy cluster to be assimilated into a coherent picture of this object. Great work by all involved.