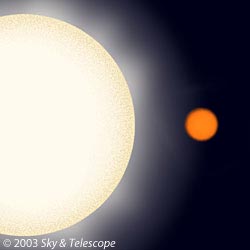 A faint red dwarf star newly discovered in Aries may turn out to be the third-closest star system to the Sun. Or maybe not; its distance is still uncertain, and it might not even make the list of the closest two dozen. But in any case it's a rare find.

Known as SO 025300.5+165258, the star glows at a very dim visual magnitude of 15.4, which is why it went unnoticed for so long. Like other dim red and brown dwarfs that astronomers have recently discovered nearby, it was found by its fast proper motion (motion across the sky). A team led by Bonnard J. Teegarden (NASA/Goddard Space Flight Center) is searching for high-proper-motion stars in the online image database created by the NEAT asteroid-hunting program. Their new catch is speeding southeast at slightly more than 5 arcseconds per year. Only seven star systems in the sky are known to have proper motions that fast.

Using the NEAT images, the team also was able to measure a rough parallax for the star. This indicates that it lies between 6 and 11 light-years away, with 7.8 light-years being the likeliest value. Only the Alpha Centauri system and Barnard's Star are closer than that.

The team also observed the star's spectrum and found a spectral type of M6.5, placing the star toward the cool, dim end of the red-dwarf sequence. If it is like other M6.5 dwarfs, its apparent brightness would put it about 12 light-years away. High-quality parallax measurements now under way by the U.S. Naval Observatory should give a very accurate distance by the end of the year. Details of the discovery are in a NASA press release and the astronomers' preprint.