Using a host of powerful telescopes, a team of European astronomers has discovered an extremely luminous quasar that existed as early as 770 million years after the Big Bang. At a redshift (z) of 7.085, this object is now the most distant known quasar. The previous record holder has a redshift of 6.4. 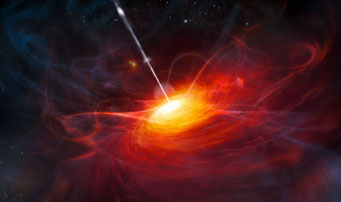 This artistâ€™s impression shows how ULAS J1120+0641, a very distant quasar powered by a black hole with a mass two billion times that of the Sun, may have looked. This quasar is the most distant yet found and is seen as it was just 770 million years after the Big Bang. It is by far the brightest object yet discovered in the early universe.

The team led by Daniel Mortlock and Stephen Warren (Imperial College, London) published its findings in June 30th's issue of Nature. According to the paper, the quasar’s spectrum shows signatures of gases that fogged the early universe and offers scientists a unique opportunity to study the events that altered the composition of the early cosmos.

At the heart of the quasar, however, lies a conundrum. The black hole that powers it is a monster. With a mass of two billion Suns, it strains currently accepted theories on black-hole formation and evolution.

Quasars form when gases swirling around supermassive black holes in distant galaxies heat up and emit radiation. Quasars that are relatively nearby can be observed in optical light. But in the case of very distant quasars, like this one, the expanding universe stretches the visible light into infrared wavelengths. 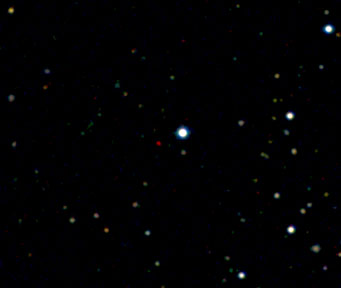 Image of the new most distant quasar ULAS J1120+0641. The quasar is the red dot near the centre of the image. The picture is a color composite made from images taken with the Liverpool Telescope and the United Kingdom Infrared Telescope. The quasar lies in the constellation Leo, a few degrees from the bright galaxy Messier 66.

This quasar was discovered using infrared deep-sky surveys from ground-based telescopes: ESO’s Very Large Telescope in Chile, the United Kingdom Infrared Telescope in Hawaii, and the Liverpool Telescope. Its presence was confirmed using photometric data from the Sloan Digital Sky Survey and spectroscopic readings from the Gemini North telescope.

As you go back in time, galaxies and quasars become increasing rare and harder to detect. It took the European team five years to make this discovery. “We expected to find quasars at redshift 7 eventually,” says Warren, “We estimated the number of quasars by taking the decline in numbers that is seen between redshifts 3 and 6, and extrapolating to redshift 7.”

A probe into the Early Universe

This quasar opens a window into an era when a process called reionization was clearing the early cosmos of dense neutral hydrogen gas. 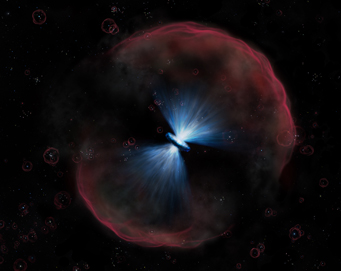 Artist's conception of how the new quasar would appear close up. The very hot extremely luminous quasar at the centre of the image is very bright at ultraviolet wavelengths, and light from the quasar is ionizing the surrounding gas, causing the red color, which is the characteristic color of ionized hydrogen. In the background can be seen faint compact galaxies that have just been born; they contain hot stars that are also ionizing their surroundings,
but much less effectively than the quasar as they are far less luminous.

The spectrum of this quasar shows both these absorption patterns, indicating active reionization in the galaxy’s immediate vicinity. The team discovered that an area of some 6 million light-years around the quasar was completely reionized and transparent to light.

“This quasar is a vital probe of the early Universe. It is a very rare object that will help us to understand how supermassive black holes grew a few hundred million years after the Big Bang,” said Warren.

The Conundrum within the Quasar

While the discovery offers unprecedented opportunities, it also presents a quandary in the form of the monstrous black hole that powers the quasar.

There are two dominant models of black-hole formation. A star with the mass of 10 to 100 Suns can go supernova to spawn these structures. A second theory suggests that accreting clumps of gases can directly undergo core collapse to generate supermassive black holes.

But both models fail to explain how such an early black hole reached the mass of two billion Suns. One possible explanation is a rapidly growing black hole that developed from the explosion of a star the size of 500,000 Suns. But current theories cannot account for a star that size in the early universe. The same is true for large collapsing gas cores.

"This gives astronomers a headache," says Mortlock. "It's difficult to understand how a black hole a billion times more massive than the Sun can have grown so early in the history of the universe. It's like rolling a snowball down the hill and suddenly you find that it's 20 feet across!"

Cosmologist Mitch Begelman (Universitiy of Colorado) voiced another concern. A voracious monster this size could speed up the process of reionization beyond expected rates, unless cocooned by a sheath of dust.

Black-hole theorist Priyamvada Natarajan (Yale University), who spearheaded the model on self-regulating black holes, says the discovery was exciting for the same reasons that it was challenging. She emphasizes the need to find more giant black holes in order to come up with better models in the future. “The finding of a population is key to theoretical understanding," she explains. "We can always come up with explanations for single rare objects, but to explain a population you need a robust mechanism.”

No Physics degree here, but what we are looking at is an event horizon of 2 billion solar masses not the black hole. It would seem to me that you are correct about time dilation issue, but once past the event horizon, all that mass would exert the identical forces and produce the identical event horizon of a finished black hole even if all the 2 billion solar mass stuff is still in a perpetual slow motion fall to the center. What we see would look exactly the same from the outside.

In reference to Richard Scott post this raises a question.

I frankly cannot see why a such a mass (a few billion solar masses) for a black hole cannot have had plenty of time in 770 million years to form. Many computational simulations suggest that gravitational infall of local high-density regions which already contain many hundreds of billions of solar masses and more are perfectly capable of forming the seeds of future massive galaxy clusters.

An ordinary and simple analysis utilizing the virial theorem easily indicates that stars aren't the only things that are going to form. There would quite naturally be populous clusters of them (of ~ 1 million solar masses, just as what we today see as ancient globular clusters) and clusters of such clusters that in aggregate form 'galaxy' masses are an obvious consequence.

There will obviously be many more discoveries of such massive (black hole sponsored) quasars at around a redshift of 7 and more. This should not be in the least surprising.

One fervently wishes scientific discovery to be portrayed to the public in the light of the more appropriate theoretical expectation rather than the constant refrain of how astonished scientists are over finding something they are perfectly well aware is well within the bounds of theoretical possibility. It pumps the popular impression that scientists don't know ANYTHING, and that's by far the most severe and pernicious inaccuracy committed with these announcements.

"A second theory suggests that accreting clumps of gases can directly undergo core collapse to generate supermassive black holes...But both these models fail to explain how such an early black hole reached the mass of two billion suns."

"This gives astronomers a headache," says Mortlock. "It's difficult to understand how a black hole a billion times more massive than the Sun can have grown so early in the history of the universe. It's like rolling a snowball down the hill and suddenly you find that it's 20 feet across!"

No, it's not at all difficult. Gravitational collapse of a sufficiently dense cloud can proceed very rapidly indeed. Initial formation of such a supermassive black hole does NOT require any adherence to the steady growth paradigm that builds more mass into it gradually via (relatively) slow-rate accretion. That black hole was almost certainly invested with most of its observed mass to begin with. We are seeing it now as a very brilliant quasar because it continues to accrete gas which is available to it. There is no reason whatsoever to think that its initial formation must be tied to its currently observed accretion rate. We'll inevitably be finding many more similar examples of such early supermassive black holes (quasars). And every renewed 'difficulty' based on after-the-fact accretion rate will continue remain as utterly irrelevant.

If the paradigm is faulty, yes, by all means, let it be shattered.

No, the experts are right this time. Like the dark energy problem, these super massive black holes at the beginning of time are a real problem for the current paradigm. Matter cannot collapse gravitationally without losing angular momentum, which is why the Moon does not fall to the Earth. Two billion solar masses of matter cannot lose its angular momentum all-at-once. The rate at which black holes grow is limited by the rate at which energy is radiated away. In other words, for a BH to gain 1 solar mass, the matter that falls in has to radiate away 1 solar mass of pure energy on its way down, according to E=mc^2. The existence of a 2 billion solar-mass BH 770 million years after the Big Bang, therefore, implies it has been radiating--on average--2.5 solar masses of pure energy per year since the BB. How can matter continue to fall in, when it is radiating that much energy? The known laws of physics say it’s impossible.

With all due respect, the article did not explain how they arrived at so large a mass for the black hole. Can the assumptions, or even any single assumption among them, that allowed the conclusion, be questioned?
Might there not have been processes during that era that we have yet to fully understand?
Do we remember the confusion over quasars when they were first seen? It was considerable.
Do we yet fully understand the nature of emitted of energy and particle jets? - even within the theories of solar formation?

Paradigm is another word for assumption.