A Planet Found Through Asteroid Belts 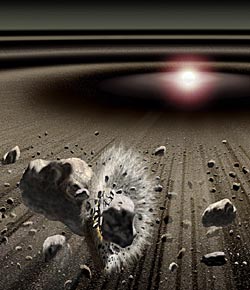 Rings of rubble encircle Beta Pictoris in this artist's illustration. Collisions between pieces create the powdery dust that astronomers see by its infrared thermal emission. (In reality, the pieces are vastly farther apart than portrayed here, and the planet at top left in the full-size image would be too far away to resolve with the naked eye.)

Astronomers are almost ready to say it flat out: Beta Pictoris has a planet. The planet's orbit is 25 percent larger than Saturn’s, and its gravity has herded smaller objects into belts much the way Jupiter has shaped our own solar system’s asteroid belt. "The Beta Pic system is likely to be at a violent, planetesimal-collision stage in an early solar system," writes a Japanese team led by Yoshiko K. Okamoto (Kitasato University) in the October 7th Nature.

Beta Pictoris is a young, 4th-magnitude white star (spectral type A3) 63 light-years away in the southern constellation Pictor. Its age is estimated at just 12 to 20 million years. Beta Pic achieved stellar star status in 1983 when the American-Dutch Infrared Astronomical Satellite (IRAS) discovered a large, edge-on disk of gas and dust around it. Subsequent imaging of the disk revealed warps and tilts, as well as a relatively empty region within 80 astronomical units from the central star (twice the average distance of Pluto from the Sun). The gap suggests that planets may already have formed in the region.

Thanks to increasingly sensitive mid-infrared equipment, astronomers have now started to map this inner part of the Beta Pic disk. Last year Zahed Wahhaj (University of Pennsylvania) and his colleagues published Keck Telescope images of Beta Pic that tentatively suggested the existence of two discrete dust rings deep within the "empty" inner 80 a.u. Now, using a high-resolution mid-infrared spectrometer on the 8.2-meter Subaru telescope, the Japanese team has resolved and analyzed thermal emission from the dust and confirms the rings. In addition, the group discovered a third, inner ring, and they also determined the dust particles' size and composition. The results strongly suggest that a giant planet orbits 12 a.u. from the star.

According to the Subaru spectroscopy, the dust particles are typically 0.2 micron across and consist of glassy (amorphous) olivine, a common magnesium silicate. The dust must be continuously replenished by collisions of larger bodies, since such small particles are quickly blown away by radiation pressure from the central star. The existence of discrete dust rings suggests that the larger bodies are also concentrated into rings, akin to our solar system’s asteroid belt.

The new, innermost ring is 6.4 a.u. from the star; the next out is at about 16 a.u. A planet at 12 a.u. would conveniently explain both, the authors argue. Its orbital period would be twice the period of objects in the inner ring; the same resonance exists between Jupiter and the outer edge of the asteroid belt. Moreover, a planet at 12 a.u. would be in a 2:3 resonance with the second ring, just like the resonance between Neptune and the inner edge of the Kuiper Belt.

"It’s an interesting result thanks to the high spatial resolution of the observations," says Sijme-Jan Paardekooper (Leiden Observatory, the Netherlands). In a paper to appear in Astronomy and Astrophysics Letters, Paardekooper and his colleague Garrelt Mellema present supercomputer simulations of the evolution of disks containing embedded planets. For the first time ever, they treated dust particles separately from gas. "The rings found by Okamoto's team are very similar to the rings in our simulations," says Paardekooper.

Interestingly, the simulations indicate that even a relatively low-mass planet (0.1 Jupiter mass, or 32 Earth masses) can open up resonance gaps in a dusty disk. Earlier simulations, which assumed that dust particles would always be carried along with gas, indicated that only planets with 1 Jupiter mass or more would leave a detectable resonance pattern in a circumstellar disk.

According to Paardekooper and Mellema, this bodes well for the future US-European Atacama Large Millimeter Array (ALMA) observatory, a gigantic millimeter-wave telescope array under construction in the Andes that will provide astronomers with high-resolution maps of circumstellar dust disks. The first of ALMA's 12-meter dishes should be working in 2007; the full array of 64 dishes should be complete by 2012.

Since we view the Beta Pictoris disk almost edge on, ALMA will probably not be able to see the putative 12-a.u. planet directly, says Paardekooper. Still, given the existence of more dust rings farther from the star, Beta Pic could very well have a full-fledged, and very large, juvenile planetary system. Indeed, as Wahhaj and his team wrote in 2003, "the Beta Pic system is too complex to be explained by the gravitational influence of a single planet."