Just when you thought the recently discovered exoplanet darker than coal is likely the most alien body known to us, along comes another curveball — a planet that astronomers think is made of diamond, located about 4,000 light-years away. The discoverers say the object formed when a pulsar in a binary system stripped its companion white dwarf of its exterior, leaving behind its carbon core.

An international team led by Matthew Bailes (Swinburne University of Technology, Australia) detected the system in a recent survey using the CSIRO’s 64-meter Parkes radio telescope in Australia, and studied it further using the 76-meter Lovell Telescope at Jodrell Bank in England. The group's paper appears in today's issue of the journal Science. 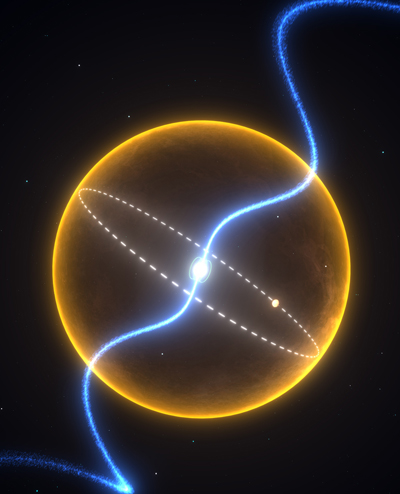 Artist's impression of the diamond planet orbiting the pulsar. Scientists think the planet was the pulsar's companion white dwarf, until it was stripped down to its core.

Pulsars are fast-spinning neutron stars produced when the core of a massive star collapses, setting off a supernova. Pulsars are named for the beams of radio emission they sweep around the sky as they spin. This newly detected one, named PSR J1719-1438 for its right ascension and declination in Serpens, is an extra-fast "millisecond pulsar": a neutron star that has been spun up to a very high speed by accreting matter from a close-orbiting companion star. This one spins hundreds of times per second.

Its pulses periodically come a little early and late, indicating the gravitational tug of a close companion slightly more massive than Jupiter whirling around it every 2 hours and 10 minutes. Assigning a reasonable mass to the pulsar implies that the companion circles it at an average distance of only about 370,000 miles (600,000 km), half again the distance from Earth to the Moon and less than the radius of the Sun.

The companion’s proximity to the pulsar allowed the discovery team to calculate how compactly its mass must be packed in order to keep it from ovedrflowing its Roche limit and being tidally torn apart by the pulsar’s gravity. The team arrived at a maximum diameter of 37,000 miles (60,000 km), only a little larger than Uranus. That in turn implies that the object has a whopping average density of roughly 23 grams per cubic centimeter, compared to 11 for lead.

The object is probably the last little remains of a carbon-core white dwarf star that poured nearly all of its mass onto the pulsar. Carbon compressed to such a high density should be squeezed into solid crystalline form — a form of diamond, at least in its interior . One can guess that it probably must have a crust and perhaps atmosphere of other stuff; news cartoons of space miners hauling away truckloads gem-quality diamonds and probably completely off the mark. (And those miners better get good pay; the object's estimated size and mass mean that a human on the surface would be squashed flat by a gravity of 17 gs.)

The mass and density estimates assume that the planet’s orbit is roughly edge-on to our line of sight, which is unknown. If it's not, the mass would be larger.

The discovery is an exciting addition to the known pulsar-planet systems. But this is the first observation reporting a "planet" that formed so directly from a star. In the previous two pulsars known to have at least one planet, astronomers think the pulsar either captured a planet from elsewhere or reduced a companion star or planet(s) into a disk of dust, which later coalesced to form fresh, smaller planets.

“This spectacular discovery provides yet another demonstration of nature's cleverness in creating planet-mass bodies,” says Alex Wolszczan (Penn State University), the Polish-born scientist who in collaboration with Dale Frail reported the first pulsar planets in 1992.

Can a stripped-down star be called a “planet” at all? The team certainly seems reluctant; its Science paper only calls the discovery a denuded white dwarf. “Technically it is a stellar remnant," says Bailes. "But it is only [about] the mass of Jupiter," a thousandth the mass of the Sun. And he adds, “All the rocky planets are composed of elements that were once in stars.”

Given its assumed mass, exoplanet astronomers are ready to call it one of their own. “If the mass is less than 13 Jupiter masses, the exoplanet community would certainly agree this is a planet,” says Sara Seager (MIT).

The discovery does not really bear on another question: are carbon (and diamond) planets common? Marc Kuchner (NASA/Goddard Space Flight Center) thinks all planets around pulsars have a high likelihood of being composed of carbon, though pulsar planets are rare. “I think it's too early to extrapolate from this discovery about how common carbon planets are around ordinary stars,” he says. "Though other discoveries, such as (the carbon-rich) WASP-12b, make it seem likely that these planets are not so exotic.”

The coverage that this has gotten in the popular press completely mystifies me. Shweta, thankfully, sticks more closely to the paper itself.

I've seen writers who equate all dense carbon with diamond (carbides, anyone? amorphous metallic carbon?), another who talks of this as being "across the galaxy" to which I can only say at 4000LY, Hardly. As well as disingenuously speculative quotes from astronomers who frankly should know better. Maybe there's a grant cycle coming up.

When I see some bizarre astronomy piece from the AP showing up at HufffPost & YahooNews usually I just wait for S&T, & that's what I should've done this time!

23 g/cc sounds impressive, but it's much less than the density of "degenerate" matter in most white dwarf stars. Do we understand how the "stripped-down" process causes the degenerate form of carbon to revert back to a more normal state? Is it simply a "phase change" as the pressure is released?

suppose the orbital plane of this object were at 89 degrees to the line of sight. Would it still be all that light? If it were edge-on and so that dense, aren't there denser forms of carbon than diamond? Diamond creates headlines, some metallic phase would not - but it would be far more interesting.

I looked up the coordinates in SkyTools. 17h19m, -14d38m is indeed in Serpens (Cauda in particular), about half a degree east of the border with Ophiuchus, near the southeast corner of the Ophiuchus stick figure. If I substitute +14d38m declination, the location would be in Hercules, near Rasalgethi, less than a degree from the Ophiuchus border and about 17 degrees from either Serpens Caput or Cauda.

I do not know everything about Extremes, but Diamond sounds like the very far end, with hot Helium Ions on this side. Furthermore, could the entire Planet be Cut and put in a BuckMiester Sphere or some thing?
Mattman