Remember Tatooine — Luke Skywalker’s home planet in the Star Wars saga, with two suns setting together on the desert horizon? Luke’s home world has always served as a good illustration of what astronomers call a circumbinary planet: a world that orbits both stars of a close binary pair. 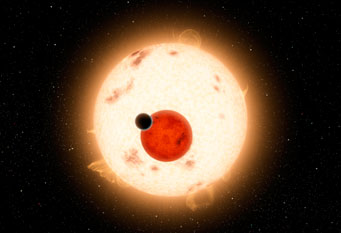 An artist's concept of the newly discovered alien world Kepler-16b, orbiting the close binary pair — an orange and a red dwarf.

Now for the first time, NASA’s exoplanet-scouting space telescope Kepler has caught such a planet crossing the faces of both stars of the Kepler-16 binary system, a 12th-magnitude pairing 200 light-years away in Cygnus. The discovery team, led by Laurence Doyle (SETI Institute), presents its findings in this week’s issue of Science.

In most cases involving binaries, an exoplanet orbits one of two widely separated stars basically as if the star were single. Only seven exoplanets of the many discovered in binaries are thought to revolve around both stars. Kepler-16b is the first of these to be confirmed by showing itself in silhouette transiting both stars.

The two stars in the Kepler-16 system are orange and red dwarfs with 0.69 and 0.20 times the mass of the Sun. Their size ratio is also about 3 to 1. The two stars eclipse each other every 41 days as they revolve around their center of mass in a mildly eccentric orbit. When the smaller and dimmer Star B moves in front of Star A, the total light from system fades by 13%. When A blocks B, Kepler notes a 1.6% dropoff.

But in addition, Kepler’s long run of precision brightness measurements shows something extra. The system’s total light also dips by about 1.7% and 0.1% in a complex timing pattern not corresponding to these mutual stellar eclipses. So the team inferred the presence of a small third body in the system, passing across the faces of stars A and B about every 229 days. 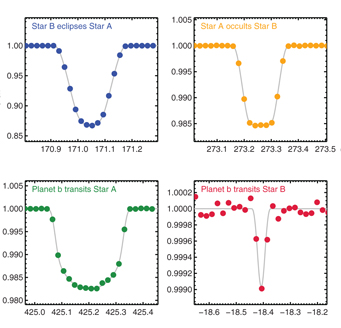 Light curves of the four kinds of transits observed in the Kepler-16 system. The two stars eclipse each other, producing the primary and secondary eclipses. The planet crosses the face of each of the two stars, causing the tertiary and quaternary eclipses.

From the slight gravitational tugs this object exerts on the two stars, the scientists conclude that it has only a third the mass of Jupiter. The depth of its transits show that it has about three-fourths Jupiter’s diameter. That makes it similar to Saturn but about 1.4 times denser, suggesting that the planet is richer in heavy elements.

So, how Tatooine-like is Kepler-16b? Not much, really. Tatooine, Star Wars aficionados will recall, was a terrestrial planet with mountainous landscapes, cities, and a plethora of alien species that raced pods for amusement. Kepler-16b is a gas giant with no hard surface and very cold, with an upper-atmosphere temperature probably averaging 185 K (–90°C; –130°F).

The only thing fairly Earthlike is the planet’s surface gravity, 1.5 g. So, hypothetically, you could stagger around on it but would tire out soon.

But even if it’s not lively world from Star Wars, the planet is a treasure for astronomers. The team hopes it will help unlock the mysteries of planet formation around binary stars. The three eclipsing objects orbit within 0.5° of the same plane. This indicates that they formed at the same time, from the same protoplanetary disk, and have not been much disturbed since. “I would assume everything formed at the same time,” says Doyle. “Any perturbations of the system after formation one would think would show up in non-planar orbits.” 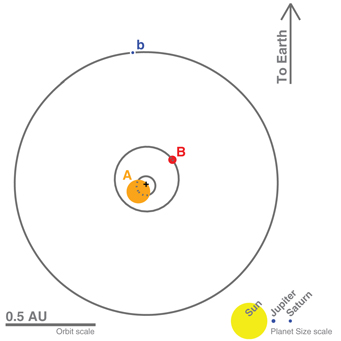 The Kepler-16 system, showing the binary star (A and B) and their planet (b). The stars, Sun, and planets are shown in scale with each other. But the scale of their spacing (the orbits) is much greater; this is what the 0.5 a.u. scale bar refers to. On this scale, the Sun (just under 0.01 a.u. wide) would be about the size of the decimal point in "0.5". There's much more empty space in the system than the illustration and the artwork above suggest.

“This is a milestone discovery, one we have all been waiting for,” says planetary expert Sara Seager (MIT). The timing of the discovery adds to “the coolness factor,” she notes. But this neat arrangement is changing; gravitational effects in this three-body system are warping the orbital plane around in a longer cycle (precession). So the planet will stop crossing the dim star in about 2014 and the brighter one in 2018. Not until around 2042 will the transits start up again from Earth’s point of view.

Even though the planet orbits just three times farther out than the separation of the two stars, simulations indicate that the system is stable, at least on time scales of a few million years (and probably much longer, considering that it exists for us to see). So Kepler-16 promises to be an object of curiosity for a long time to come.

This is pretty darn cool. Kepler is an amazing instrument. It tickles me to think that the phrase "circumbinary planet" existed before the first such planet was confirmed to exist. How long will it be before "circumbinary" starts showing up in crossword puzzles?

I was talking about that word being in a crossword puzzle w/ my friend!