Astronomers have a great new laboratory for testing the predictions of Einstein's general theory of relativity. Warren Brown (Smithsonian Astrophysical Observatory) and a team from Texas and Spain have discovered two white dwarf stars locked into a tight mutual orbit. 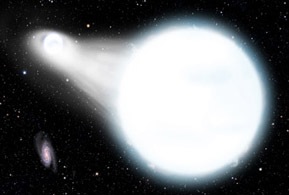 An artist's conception of two white dwarfs exchanging stellar matter in a binary system. When astronomers study the orbits of two such stars, they can test the predictions of Einstein's general theory of relativity.

The stars, located 3,000 light-years from Earth, form a binary system in which they orbit each other every 12.75 minutes, at a speed of 370 miles (600 km) per second. They are separated at an average distance of 75,000 miles (120,000 km), a hair's breadth in astronomical terms. Because they orbit in a plane edge-on to Earth, they periodically eclipse each other, letting astronomers make more precise measurements of the system. By closely observing changes in the stars' orbits, astronomers will be able to test whether Einstein’s theory accurately describes the universe.

The team found the system in March 2011 during a search for low-mass white dwarfs, in a project known as the ELM Survey. The scientists gathered their data using Arizona's 6.5-meter MMT Observatory.

According to general relativity, matter deforms the fabric of space-time around it. Every piece of matter has this effect — even small objects such as pencils and chairs — but the deformation can more easily be studied when it's caused by extremely massive objects such as stars and black holes. (Imagine a bowling ball placed on a waterbed: the depression in the bed's surface mimics the deformed space-time fabric caused by a star's mass.)

General relativity also predicts that as two stars orbit a common center of gravity, gravitational waves will draw energy away from the system, causing the stars to migrate slowly toward each other. The stellar motions produce undulations in the underlying space-time fabric, just as a bowling ball rolling along the surface of a waterbed creates ripples. And as astronomers watch the two white dwarfs spiral inward, they can compare the shrinking orbits with general relativity's predictions.

The binary system, known as J065133+284423 for its sky coordinates in the constellation Gemini, is particularly helpful because its two stars do not exchange material. Often, one star in a closely separated binary system will draw matter from its companion star, like a cosmic mosquito. But J0651 is "by far the closest binary in which there is no mass transfer and thus we can cleanly observe the nature of these objects, and their eclipses," says Brown.

Calculations indicate that in 900,000 years J0651’s white dwarfs will come so close that one star will begin accreting material from the other, but no one is quite sure what will happen when it does. If the stars have significantly unequal masses, they might settle into a stable mass-transfer system. Alternatively, the stars might merge into an even larger white dwarf. Or they might collide and trigger a rare explosion known as an underluminous Type Ia supernova. Not yet completely understood, these stellar blasts produce 10 to 100 times less light than a standard Type Ia supernova.

Several kinds of evidence connect these weaker explosions to white-dwarf pairs. “Underluminous supernovae only throw out a couple tenths of a solar mass of ejecta, which implies that the progenitor detonated only about that much material," says Brown. Also, these weaker star explosions occur both in new and old galaxies, suggesting that at least some of them arise from older stars. Another contributing factor might be that the combined mass of the two white dwarfs — 0.8 solar mass — does not exceed the Chandrasekhar limit of 1.4 solar masses, preventing them from igniting a Type Ia supernova.

But this new binary is not the only system that has been used to test general relativity. For example, radio astronomers have been monitoring an eclipsing binary known as J0737-3039, consisting of two pulsars. (Pulsars are neutron stars left over from supernovae.) When one neutron star eclipses the other, the light from the more-distant star travels through the heavily distorted space-time around the foreground star. As a result, the light travels a longer distance, and thus arrives at Earth slightly later than it would have had its star not been eclipsed.

Each kind of binary system has its advantages as a general relativity test bed. The J0737 pulsars are smaller, spin more rapidly, and have more mass than the newly found white dwarfs, so they yield more precise measurements. But the white dwarfs are closer together than the pulsars do and have a much shorter orbital period: 12.75 minutes versus 2.4 hours.

How well astronomers will be able to use the white-dwarf system to test general relativity, however, depends on how precisely they can determine the stars' masses. "The precision for a test of general relativity will be limited by the precision of the masses of the two white dwarfs," says Michael Kramer (Max Planck Institute for Radio Astronomy, Germany), who is part of an international team studying J0737.

The paper has been accepted by the Astrophysical Journal of Letters.

The illustration is completely out of tune with the article. It appears to show one star shedding mass onto another. That is not what is happening with the pair discussed in the article.

The illustration I believe is depicting a future scenario.

A picture of two white dots close together was considered, but it didn't seem to illustrate anything.

"The stars form a binary system in which they orbit each other every 12.75 minutes. Because they orbit in a plane edge-on to Earth..." gravitational wave detectors should look for a signal in the 0.001 Hz frequency-band.

This system is a neat discovery, but I'm a little surprised that there's no mention in the on-line Sky and Telescope article about the 1993 Nobel Prize in Physics awarded to Taylor and Hulse for their demonstration that the orbital changes of a binary pulsar which they discovered superbly matches the predictions of General Relativity. Did I miss something in the write-up?