A Raft of New Planets in Silhouette

They're starting to come in bunches now, and it's about time.

When it comes to finding new planets orbiting distant stars, the "transit" method — watching for a slight dip in a star's brightness caused by a planet moving across it in silhouette — holds tremendous promise. For some time now, huge numbers of discoveries by this method have supposedly been right around the corner. But in practice they've come rather gradually.

There are several reasons for this. Only a very few planets will, by luck, orbit their stars almost exactly across our line of sight. The dip in brightness that even a giant planet causes is typically about 1% of the star's light, not easy to notice or measure. The dips are brief compared to the times of steady brightness between them. And worst of all, other things mimic these events, causing false alarms that must be sorted out.

For instance, a similar brightness dip may be caused by a dimmer, run-of-the-mill eclipsing binary star near the target star, close enough to it along our line of sight that the light of all three stars is blended into one image. If that sounds unlikely, it is — but so is a transiting planet. Another problem comes from small, transiting red-dwarf stars.These are hardly larger in diameter than a Jupiter-size planet (despite their much greater mass), and thus they cause similar brightness dips.

So in practice, each "discovery" has to be checked by looking for a slight radial-velocity wobble in the host star itself — to find out whether the dips are really due to something orbiting the star and, if so, to find the object's mass. This is a tedious job that needs a large telescope and a specialized, extreme-precision spectrograph designed for planet discovery. Fortunately the world now has quite a few of these setups.

Of the 287 extrasolar planets currently cataloged, only 46 have been detected by the transit method. But these are especially valuable — partly because the amount of dimming reveals the planet's diameter and partly because, since we know the orbit is nearly edge-on, they allow the radial-velocity method to pin down the planet's mass directly. And in a few cases, astronomers have even been able to detect chemicals in the planets' upper atmospheres during transits. 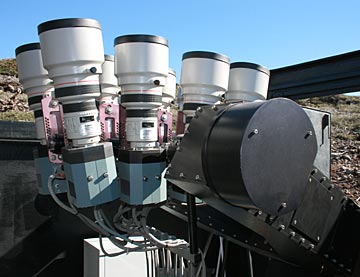 SuperWasp North on the island of La Palma. The wide-field cameras are small as astronomical instruments go, but they're large enough to record millions of stars — and accurately measure the brightness of each one in each of 800 exposures per night. Software examines this data for slight, periodic brightness dips. Click image for larger view.

One transit-search project has jumped to the forefront over the rest. The astronomers running SuperWASP ("Wide Angle Search for Planets") yesterday announced a list of 10 new transiters confirmed by radial-velocity followups. WASP-6b through WASP-15b all orbit 10th- to 12th-magnitude stars very closely. The new worlds range from 0.5 to 8 times Jupiter's mass, and if their diameters are accurate (still iffy), they display a surprisingly wide range of densities.

SuperWASP consists of two arrays of eight wide-field cameras, one in South Africa and one in Spain's Canary Islands. They run automatically all night every clear night, taking exposures about once a minute — roughly 800 exposures per camera per night. "The eight wide-angle cameras allow us to monitor millions of stars simultaneously," says the WASP team, enough to pick up a good smattering of suspected transit events.

Some time before, I needed to buy a good car for my organization but I didn't earn enough money and could not order anything. Thank heaven my mother adviced to try to get the http://www.lowest-rate-loans.com at trustworthy creditors. Therefore, I acted so and used to be happy with my collateral loan.