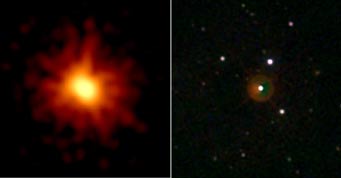 The afterglow of GRB 080319B was imaged by Swift's X-ray Telescope (left) and Optical/Ultraviolet Telescope (right). It was, by far, the intrinsically brightest gamma-ray-burst afterglow ever seen. Click image for larger view.

With NASA's high-energy Swift Observatory in orbit, cosmic gamma-ray bursts just keep setting new records. The most powerful one yet — in fact, the most violent and luminous event ever seen in the universe — flashed into view on the morning of March 19th. While Swift caught it from orbit, ground-based cameras on the hunt for gamma-ray bursts (GRBs) saw a flare of visible light from the burst that peaked at visual magnitude 5.4.

This sets a record of a different kind: what is the farthest thing visible to the unaided eye? The usual answer is the Great Andromeda Galaxy at 2.5 million light-years, or, for a skilled observer under a very dark sky, the dimmer Triangulum Galaxy, M33, at 2.9 million light-years. But the visible-light afterglow from the March 19th burst had a redshift of 0.94, corresponding to a look-back time of 7.5 billion years — several thousand times more than the nearby galaxies.

Of course, you would have needed a dark sky and would have had to be looking very, very carefully at the right point in Bootes during the less-than-a-minute duration of maximum light. Were you out observing that night but just looking the wrong way? It happened at 2:13 a.m. EDT, when Bootes was high in the sky for North America.

Incidentally, the burst, known as GRB 080319B for the date it happened, was one of four that Swift spotted on March 19th. (A couple months earlier Swift went for many weeks without finding a single one, long enough that its handlers began to fear that something was broken.) Gamma-ray scientists noted another coincidence: the flurry of bursts marked the death of science fiction writer Arthur C. Clarke, as if the gamma-ray sky were lighting up with fireworks to send him off in style.

The following is from a NASA/Goddard press release:

GRB 080319B's optical afterglow was 2.5 million times more luminous than the most luminous supernova ever recorded, making it the most intrinsically bright object ever observed by humans in the universe.

Most gamma ray bursts occur when massive stars run out of nuclear fuel. Their cores collapse to form black holes or neutron stars, releasing an intense burst of high-energy gamma rays and ejecting particle jets that rip through space at nearly the speed of light like turbocharged cosmic blowtorches. When the jets plow into surrounding interstellar clouds, they heat the gas, often generating bright afterglows. Gamma ray bursts are the most luminous explosions in the universe since the big bang.

Analysis of GRB 080319B is just getting underway, so astronomers don't know why this burst and its afterglow were so bright. One possibility is the burst was more energetic than others, perhaps because of the mass, spin, or magnetic field of the progenitor star or its jet. Or perhaps it concentrated its energy in a [particularly] narrow jet that was aimed directly at Earth.

See an animation of the visible-light flare recorded by the Polish observing group Pi of the Sky.

The community of gamma-ray astronomers posted live details of the four March 19th discoveries, and early analyses as they happened, to the GCN Network.

More on gamma-ray bursts and what they are.

GLAST, NASA's next-generation gamma-ray observatory, is now scheduled for launch May 16th. Read all about it in the June Sky & Telescope, soon on newsstands or in your mailbox.

This gamma-ray burst was not the first after the long drought of December and January. That occurred on 21 Jan 2008. Since the middle of January Swift has been averaging about two or three bursts a week. GRB 080319B, however, is the most spectacular gamma-ray burst that Swift has seen so far.

Fixed; thanks for the correction! --Alan MacRobert

I have suggested that we start referring to this massive GRB as "The Clarke Event" in honor of Arthur C. Clarke. I have contacted several of the astronomers involved in the discovery, as well as others, and the response has been universally positive. How can I get S&T on the bandwagon, so to speak?

I blogged about it here:
http://blogs.earthsky.org/larrysessions/space/032190/why-not-the-clarke-event/#comments

Gamma-ray bursts are given catalogue numbers based on the date that they occurred. There is no formal mechanism for naming gamma-ray bursts beyond that. A handful of bursts have been given informal names, but none of these names are recognized by the International Astronomical Union, which is the body that names astronomical objects and events. However, many astronomers are referring to this gamma-ray burst as the Sir Arthur C. Clarke Burst, so there is a good chance that it will catch on. I would encourage Sky and Telescope to use this name, at least informally as a tribute.