A Ring to Remember: the October 3rd Annular Eclipse

The annular eclipse coming and going. These frames are from a series taken by Stephan Fichtner of Astronomie Heute magazine ('Astronomy Today'), Sky & Telescope's German edition. Fichtner planned to set up his telescope next to a busy highway 'to escape in case of cloudy weather,' he writes. His foresight paid off; he outran morning clouds 'with the help of two motorbikers.'

It wasn't a total eclipse, but it was spectacular nonetheless. On October 3, 2005, an annular eclipse of the Sun crossed parts of Portugal and Spain, the Mediterranean, and North and East Africa, wowing countless sky spectators. Millions more watched the partial aspects of the eclipse crossing the rest of Europe and most of Africa and South Asia. 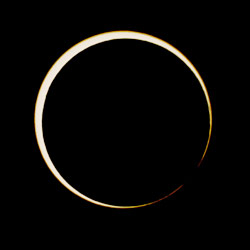 Irregularities on the Moon's limb were especially apparent at the second and third contacts of the annular eclipse. Eusebio Rufian caught this shot from downtown Madrid using a 7-inch Maksutov telescope and a Nikon 100 digital camera body.

"We were just south of Siguenza about 100 kilometers north of Madrid," reports Sky & Telescope executive editor J. Kelly Beatty. His group was positioned on the northern edge of annularity in order to record Baily's beads — sunlight shining through lunar valleys — where the limbs of the Moon and Sun barely met. "The day dawned clear, but after sunrise we started seeing lots of fair-weather cumulus clouds," said Beatty. "Some encroached on the Sun with about 10 minutes to go before second contact. At one point the clouds were so thick that we could view the eclipsed Sun through them without needing filters. Fortunately the air was cooling (the temperature dropped 7° F from first to second contacts), and so the clouds dissipated just in time."

That was only the start. Minutes later the spectacle swept across Spain's capital city of Madrid. "The 20 members of TravelQuest's tour to Spain saw a beautiful annular eclipse from the central square in ancient Alcala, just northeast of Madrid," reports Sky & Telescope's Paul Deans. "We were hosted by the Alcala Astronomical Society, which put on a
public observing event in Cervantes Square in the heart of the old city. They estimate about 1,000 people showed up for a glimpse of the eclipsed Sun. The sky was perfectly clear from beginning to end. About 15 minutes before second contact the sky began to grow noticeably dark, the temperature began dropping, and the wind picked up. During annularity, rings of sunlight were visible on the ground under the trees." 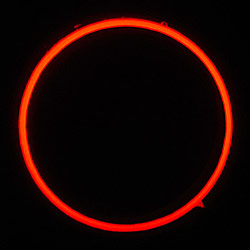 Prominences of ionized hydrogen gas, held in place by solar magnetic fields, stand around the rim of the annularly-eclipsed Sun in this image taken in the red wavelength of hydrogen-alpha emission. José Ribeiro of the Atalaia group took this image through an H-alpha filter from the eclipse centerline in northern Portugal.

In Madrid itself, Ray and Dori Brooks viewed the event through a hydrogen-alpha filtered telescope. "I hope many people saw this annular in H-alpha!" they said. (An example is at right.) "We never thought we would have so much fun with an annular. There was a prominence nearly perfectly placed for first contact. We saw the Moon cover it two minutes early, and then two minutes before third contact, saw it on top of the black Moon. There were a dozen various prominences on the bottom." (Hydrogen-alpha light is emitted by excited hydrogen atoms at the deep-red wavelength of 656.3 nanometers. A special filter arrangement that passes only this one narrow wavelength, while blocking most of the Sun's white light, accentuates ionized-hydrogen structures on and around the Sun's face.)

For Jay Pasachoff, a professor at Williams College, this was his 40th solar eclipse since 1959. He watched it at the Valencia planetarium on Spain's east coast along with 1,000 members of the public. "The sky was completely clear throughout," he writes. "The 3 minutes 40 seconds of annularity were preceded and followed by Baily's beads at the edge of the crescent." 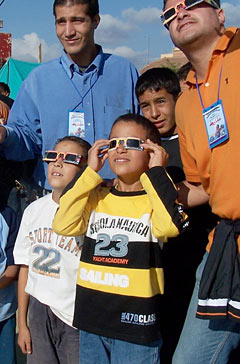 In Batna, Algeria, several astronomy clubs set up in the Seffouri Stadium, and hundreds of members of the public showed up to join them.

From there the eclipse proceeded across the Mediterranean to North Africa. In Algeria, the Sirius Astronomy Association helped to make the eclipse a successful public event nationwide. The group set up in the city of Batna in eastern Algeria, along with a dozen other astronomy associations that it invited. "Since it was the only region along the path of the eclipse which was cloudless," writes Jamal Mimouni, "the National Algerian TV covered online from our site for close to three hours, instead of the expected two minutes! It was seen by some 10 million viewers, especially youngsters — since the day of the eclipse was declared a holiday so that pupils would stay at home watching the eclipse on TV instead of 'risking their sight' outside. All the official sites were fully cloudy that morning." 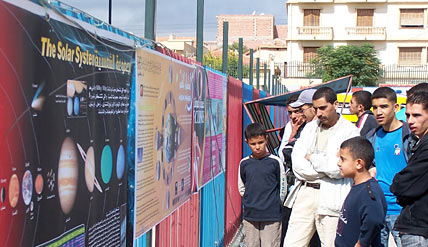 Eclipse watchers in Batna, Algeria, were also treated to various club displays about astronomy in general.

The next solar eclipse to cross the Earth will be a total one on March 29, 2006, crossing Africa from Ghana to Libya and Egypt, then parts of the Mediterranean, Turkey, and Central Asia. The eclipse will again be partial for all of Europe, most of Africa, and much of South Asia.

The eclipse was partial from Greece, where Anthony Ayiomamitis took pictures every 5 minutes throughout the event and assembled them into a dramatic composite. 'Thanks to idyllic Aegean skies,' he writes, 'today's solar eclipse was a reminder of the dynamic nature of the heavens and a tremendous prelude to next spring's total eclipse, whose path of totality includes the Greek isle of Kastelorizo.' 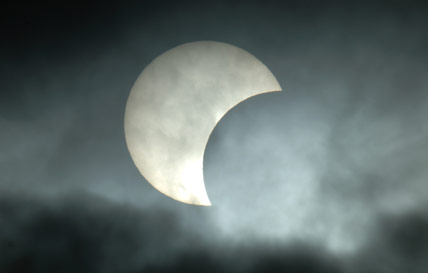 Not everyone had good weather. At Stavanger, Norway, Jarle Aasland shot this view of the partial eclipse 'through a hole in a very heavy cloud cover.' 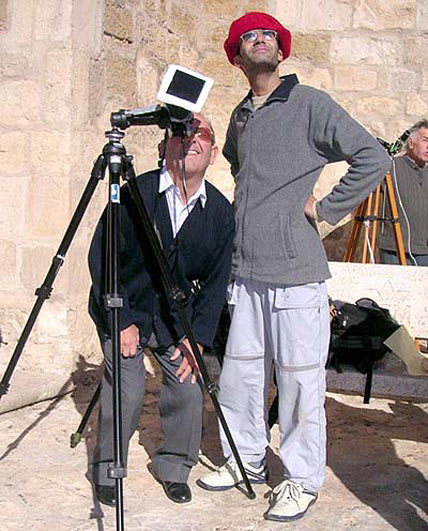 Oshin Zakarian (right) traveled with a group from Nojum, the astronomy magazine of Iran, to Carrascosa del Campo, Spain, for the eclipse. Here he is showing the partial view to locals. 'Telescopic Baily's beads were seen seconds prior to second contact and seconds after third contact,' writes Nojum editor Babak Tafreshi.

Finally! The Galaxy’s Most Mysterious Star Is Dimming 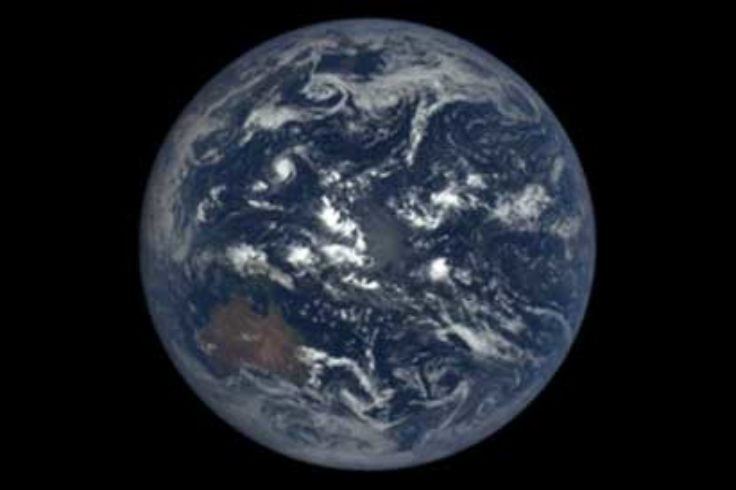 One Big Ball of Rock