If you missed the Apollo years, then Spacefest 2009 held this past weekend in San Diego was for you. It offered attendees a chance to return to an earlier time and see humanity from a point of view that we seem to be missing out on these days. 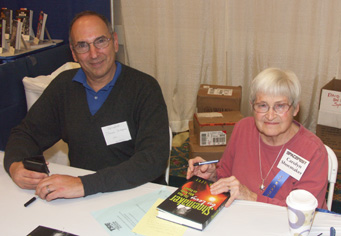 This year’s Spacefest was much more than a momentary trip of nostalgia or an opportunity to stand in line for an astronaut’s autograph. It was even more than a chance to meet some of the people who sat atop a 36-story Saturn V moon rocket as it thundered to life, lifting the human spirit skyward.

Spacefest 2009 had a strong science component. Carolyn Shoemaker’s lecture, “Planetary Science Then and Now,” was both a look backward to the time when she and her husband, Gene, were traipsing across the Australian Outback searching for impact craters, and a look forward to the amazing developments going on as NASA astronauts prepare for a final servicing mission to the Hubble Space Telescope. 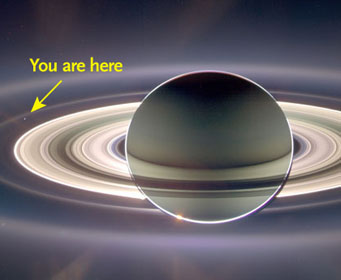 Earth appears as a tiny point of light behind Saturn's backlit rings in this photo from the Cassini spacecraft.

I found the most fascinating science talk to be Carolyn Porco’s moving review of the accomplishments thus far of the Cassini spacecraft currently in the middle of its tour of the Saturn system, which may stretch out as far as 2017. Her talk concluded with a backlit image of Saturn, taken from the planet’s night side and showing its exquisite and complex ring system. To the left of Saturn’s globe, almost hidden in the rings and looking like a bad pixel or a cosmic-ray artifact, there’s a tiny dot. Covering just a few pixels, it’s an image of Earth. Everything that makes up human history — every Shakespearean performance, every symphony and rock concert, every political contest, everything — has taken place on those few pixels.

This year marks the 40th anniversary of the first Apollo Moon landing, and crew members Buzz Aldrin and Michael Collins both starred in Spacefest 2009. I especially admire Collins, who spent several hours alone in Apollo 11’s Command Module while his crewmates made humanity’s first footprints on the lunar surface. Like me, these astronauts knew and admired Gene Shoemaker, who trained them to search for interesting rocks and minerals on the Moon. Almost singlehandedly Gene created a new science called astrogeology.

Spacefest is organized by Kim and Sally Poor and their company Nova Space. They have been marketing space art and arranging astronaut events for years, and have developed quite a following within the space community. Although this year the amateur astronomy community wasn’t as well represented as in the past, there was a small presence.

I remember vividly Christmas Eve 1968, as my parents and I stared silently at our television screen while lunar craters, mountains, rilles, and valleys passed by. Along the bottom of the screen were the words “Live from the Moon.” I felt that at times even Walter Cronkite was moved to silence, as we shared this profound moment in history.

Four decades later, through the magic of Spacefest, we shared these moments again. The event was a reminder that our species occupies a delicate small blue world. We have many problems, and sometimes we don’t solve them very well. But we are capable of great compassion and wondrous things. We can look up at the stars and wonder how and why we are here.

"...our species occupies a delicate small blue world. We have many problems, and sometimes we don’t solve them very well. But we are capable of great compassion and wondrous things. We can look up at the stars and wonder how and why we are here. "

That photo of backlit Saturn (with Earth in the deep background) is wondrously beautiful! Wow!

Apart from the mavelous photo with that extra dimention added by those few special pixels I liked the last alinea most: it could have been said by the other famous Gene (Rodenberry). It is the spirit of Star Trek, a series also both looking to the now and the future in a positive way.