An unprecedented string of public skywatching events will be packed into this brief period, all designed to engage people and bring them out for a worldwide star party that will cap the program on Saturday evening, April 4th. 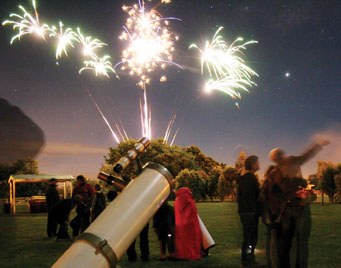 Collectively, the period is called “100 Hours of Astronomy.” It’s a Cornerstone Project of the International Year of Astronomy 2009, tailor-made for amateurs who’d like to try some outreach. During the final 24 hours a global star party will sweep around the world, with local gatherings beginning as darkness descends. Even city street corners will come alive, with the third annual International Sidewalk Astronomy Night happening the first weekend in April. Thus many sidewalk astronomy regulars will already be at their stations.

The Astronomy Marathon is described in the April, 2009, issue of Sky & Telescope. Click here to download the entire article as a 3-megabyte PDF file.