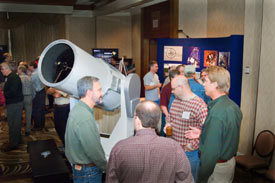 Plenty of astrophotography equipment and software was on display between lectures.

Astrophotographers of all experience levels convened in San Jose, California, on November 11th to attend the second annual Advanced Imaging Conference (AIC). The three-day event, sponsored by various companies and groups involved with amateur and professional astronomy, featured presentations on image-processing techniques and observatory optimization given by some of the greatest CCD imagers from around the globe.

The conference was opened by master of ceremonies Steve Mandel, who unveiled his "Unexplored Nebula Project," which showcases faint reflection nebulae at high galactic latitudes — objects that are virtually unknown to the amateur community. These clouds of dust are outflows that reside far from the plane of the Milky Way, and they are faintly illuminated from the combined light of our whole galaxy, rather than its individual stars. Mandel encouraged other CCD imagers to "go where no amateur has gone before." 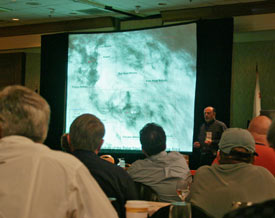 Master of ceremonies and noted astrophotographer Steve Mandel presents some findings of his 'Unexplored Nebula Project' at the Advanced Imaging Conference in San Jose, California.

Other notable amateur astrophotography speakers were Adam Block, Ron Wodaski, and Russ Croman, as well as many others who shared their own unique processing techniques.

Lisa M. Frattare and Zoltan G. Levay of the Space Telescope Science Institute gave a rare inside look at the unique challenges and rewards of working with the aging Hubble Space Telescope, as well as the steps involved in processing its data. Among some of the surprising facts revealed by Frattare were the evasive action necessary to protect the telescope from meteor showers such as the Leonids. Levay gave an insightful demonstration of the processing techniques applied to Hubble data with a surprisingly common tool: Adobe Photoshop.

Friday night showcased the release of a suite of software applications from CCDWare that simplify everything from collimation, multiple image acquisition, and advanced processing algorithms. During breaks between talks, the vendor booths were opened to give attendees a taste of the new products to come from manufacturers such as SBIG, Yankee Robotics, Software Bisque, DC3 Dreams, RC Optical Systems, Astrodon Filters, Diffraction Limited, as well as distributors Anacortes Telescope & Wild Bird, and Oceanside Photo and Telescope. NASA's Global Telescope Network also ran a booth, inviting amateur imagers to join and participate in cutting-edge astronomical research.