Albert Jones, a legendary variable star observer, passed away this week, leaving behind a voluminous legacy of observations. 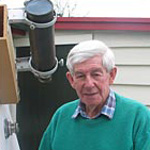 Albert Jones passed away on September 11, 2013. The variable-star legend was 93 years old, and had spent almost 70 of those years observing.

The international astronomy community lost one of its greatest visual observers with the passing of Albert Jones on September 11th at the age of 93. Jones was best known for his phenomenal skill as a variable star observer, having made more visual brightness estimates than anyone in history. He is also remembered as a comet observer, and his discovery of a comet in 1946 when he was 26 and another 54 years later at the age 80 set a record for the greatest time span for comet discoveries by an individual. 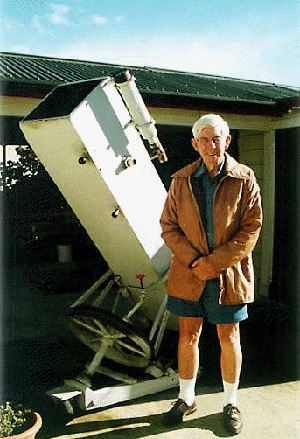 Albert Jones passed away on September 11, 2013. The variable-star legend was 93 years old, and had spent almost 70 of those years charting stars' variability, hunting comets, and observing supernovae.

But it was another New Zealander, Frank Bateson, who introduced Jones to variable star observing in January 1943. By 1963 Jones became the sixth person to amass more than 100,000 visual estimates of variables, and he passed the 500,000 mark in 2004, setting a record that stands today.

Jones, however, wasn’t interested in quantity but rather quality when it came to making magnitude estimates. This point is obvious from a story Jones told after attending a meeting on the American Association of Variable Star Observers (AAVSO) in the spring of 1997. In Jones’s words, “At the banquet at St. Luc, Janet Mattei announced and presented awards, and then she said the next recipient had done this and that and had made over 500,000 observations. That set me wondering who had done so much until she announced the name – people applauded and everyone looked at ME – I was overwhelmed – I had no idea that I had made that many estimates!” Albert Jones received a standing ovation from everyone there.

Jones’s career spanned almost 70 years, ending only until a year or two before his demise, and his contributions to astronomy earned him several awards. Among the more notable are the Award of the Order of the British Empire by the Queen for his services to astronomy, the Donohoe Comet Medal for his first comet discovery, the Edgar Wilson Award for his second comet discovery, BAA's Merlin Silver Medal and Prize, and the Amateur Achievement Award of the ASP. The minor planet (3152) Jones was named in his honor in 1988.

For more about the life of Albert Jones, you can read his conversation with Mike Simonsen of the American Association of Variable Star Observers (AAVSO).

Amar Sharma is the most active comet amateur from India. He is conducting research on the lives of comet hunters and discoverers for an upcoming work.