AUSTIN — Astronomers have announced the detection of a system of three candidate exoplanets, each with a radius smaller than Earth’s. The planetary system’s host star, dubbed KOI-961, is a dim red dwarf in the NASA Kepler mission’s field of view. The planets are among the smallest discovered around a Sun-like star and is the most compact system to date. They are “an incredible find,” says Sara Seager (MIT), who was not involved with the study. 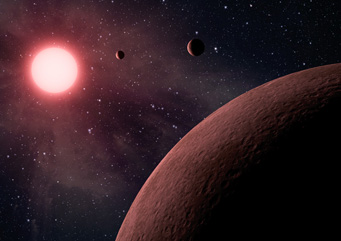 Affectionately called â€œPlanets of the Appsâ€ by Johnsonâ€™s team, after the amateur whose insight sparked the study, three sub-Earth-sized exoplanets orbit a dim red dwarf star less than 20 percent the size of the Sun. A spacecraft flying through the KOI-961 system might get this view of the star and its retinue of small planets.

The three bodies were found when they repeatedly crossed in front of KOI-961, creating minute dips in the star’s light. So far they’re still candidate planets because astronomers haven’t detected them using other means. The most common follow-up method measures wobbles in the star’s position along our line of sight caused by its planets as they orbit, from which researchers can calculate the planets’ masses. But KOI-961 has a visual magnitude of about 16, which is a couple of magnitudes too dim for precise wobble measurements using current instruments.

Still, the international team of astronomers was remarkably cautious in its analysis. The researchers spend most of their 13-page paper minutely considering the host star’s properties and various alternatives to the triple exoplanet result. And with such a high number of transit observations — several hundred crossings were observed for the innermost planet, says team member John Johnson (Caltech) — it’s highly unlikely the signals aren’t real.

The KOI-961 system came to the researchers’ attention through a lucky break, Johnson explains. One of Johnson’s collaborators is a British amateur astronomer named Kevin Apps, who in his spare time “devours” astronomy research papers and memorizes catalogs, which he can compare in his head. It was Apps who alerted Johnson’s team to the fact that KOI-961 had properties eerily similar to those of Barnard’s Star, one of the nearest and best-studied stars in the sky. 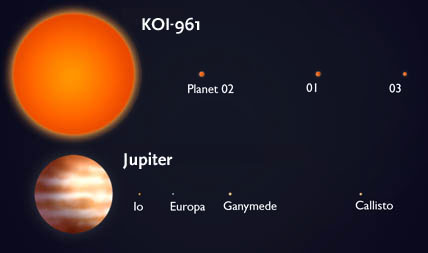 This illustration compares the KOI-961 planetary system to Jupiter and its large Galilean moons.

“It was as if it was the exact same star,” Johnson says. Using Barnard’s Star as a base, the astronomers determined KOI-961’s properties to high precision. From those estimates they found sizes for the three planets: 73, 78, and 57 percent of Earth’s average girth, from nearest to farthest from the star. The smallest, KOI-961.03, is about the same size as Mars. None resides in KOI-961’s habitable zone.

Without mass measurements the astronomers don’t know the planets’ densities, so they can’t say what they’re made of. But common sense dictates they’re probably rocky, Johnson says. Even if the planets were made completely of iron (which is improbable at best), they would still be less than two Earth masses.

The new exoplanets have raised hopes of detecting planets around more dwarf stars, allowing astronomers to better understand how many of these small stars have families of their own. “It’s kind of like cockroaches,” Johnson says. “If you see one…”

Say, if comparing Barnard's Star, "one of the nearest and best studied stars" could yeild this find, how about comparing Kepler Objects of Intrest with the best known star of all? Surely there must be lots of Sun analogs among the 156k KOIs. I nominate Apps for the search, and very well done, sir!

BMayfield, there are many G class stars, this URL shows 725 exoplanets now including a number of KOIs http://exoplanet.eu/index.php and nearly half are spectral class G stars.

Interestingly this site is now populating host star ages and the average for the G class is 5.525E+9 years old which is 1 billion years older than the Sun. My comment - where are all the old, highly evolved civilizations in the Milky Way? If life on earth evolved from non-living matter by chance as well as intelligent life evolved by chance on earth, this natural process should be taking place in numerous exoplanets, especially when you look at many of their host star ages now.

Thanks for the reference Rod. Already in my list of favorites though, but I haven't looked a it lately. I've been loving a new app (not to be confused with Sir Kevin) on my iphone called "exoplanet" As to your question re the apparent lack of old civilizations, the book "Rare Earth" deals with exactly this issue. (haven't read it yet, on order) Though the evidence is mounting that the universe is a veritable planet factory, it may or may not produce earths in abundance. That is THE question that Kepler is hopefully sheding light upon.

I googled 'Rare Earth' and found many websites reporting on the hypothesis. It looks like our unique Earth and habitable conditions for life and intelligent life arose in the Milky Way via a large number of cosmic accidents that add up to making the Earth a rare place to be. For me this sounds like an appeal to the law of "Stuff happens" when it comes to explaining origins so it is faith to accept such a view. Genesis 1:1 is another alternative which does not appeal to the law of "Stuff happens".

Rod, it does indeed require faith to believe in either intellegent creation or random undirected chance to explain existance. For me, it's more logical to believe we were designed; why even one of our 60 trillion cells is much more complex than any of man's inventions. As one who believes in creation, I'm thrilled to learn more about the wonders of God's creations. That's why I'm following Kepler results and reading Sky and Telescope in the first place. I want to know, "did God cause many habitable worlds to come into existance"? This latest finding of KOI-961's Mars size planet is great, because it's beginning to prove that even small planets are out there, and that this tool of discovery is able to help detect them. The Kepler mission (as well as all telescopes) helps us do what Isaiah 40:26 commands, "Raise your eyes high up and see, Who has created these things? It is the One who is bringing forth the army of them even by number, all of whom he calls even by name. Due to the abundance of dynamic energy, he also being vigorous in power, not one of them is missing."