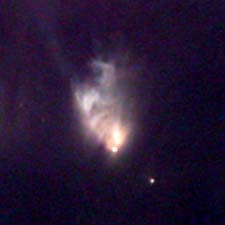 Whoever says backyard observers with small telescopes can't contribute to professional astronomy hasn't met Jay McNeil. On the night of January 23rd, armed with his 78-millimeter (3-inch)refractor and a CCD camera, the veteran deep-sky astrophotographer went outside to observe Messier 78 in Orion from his rural Kentucky backyard. When he came back inside and compared his shots to other recent amateur images, he noticed "something funky looking in the field," says McNeil. Convinced that something was indeed amiss, he contacted Brian Skiff at Lowell Observatory in Arizona. "Brian immediately referred me to Bo Reipurth (University of Hawaii), one of the world's leading researchers of early stellar evolution."

Announced on February 10th in the International Astronomical Union Circular, McNeil's new object seems to be a faint optical counterpart to the infrared source IRAS 05436-0007 that has gone into outburst, producing a large reflection nebulosity. Now dubbed "McNeil's Nebula," the nebula was discovered at around magnitude 15. According to Reipurth, this is a rare event indeed. In this scene, hidden behind a thick curtain of gas and dust is a newborn star. However, there appears to be a hole in the curtain, and brightly shining matter accreting around the star is blazing through the gap.

"Based on the data I am receiving, this event can be short lived, fading to its previous brightness in a matter of months or years, with the potential for occasional flareups such as what is being observed at the moment," says Reipurth.

Unlike comet, asteroid, or even nova discoveries, McNeil's Nebula is the first nebula find for an amateur in recent memory. But this isn't the first significant accomplishment for McNeil and his CCD camera. At the Texas Star Party last year, McNeil successfully took up a challenge from Sky & Telescope contributing editor Stephen James O'Meara to be the first amateur to image an L-type brown dwarf (Sky & Telescope, April 2004, page 78).