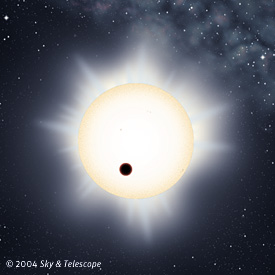 This artist conception depicts a Jupiter-size planet transiting its host star at a close distance. Astronomers know of six stars that are transited by exoplanets; two have been detected by amateurs, including the recently discovered planet TrES-1.

S&T illustration by Steven A. Simpson.

Tonny Vanmunster used a Celestron C-14 telescope and an SBIG ST-7XME CCD camera (without filters) at his private CBA Belgium Observatory to detect the TrES-1 transit. The telescope rested on an Astro-Physics AP1200 GTO mount. The planet began crossing the star's disk at 21 hours, 13 minutes Universal Time on September 1st, just when the transit was predicted to commence. The event lasted about 3 hours and ended right on cue. The star's brightness dipped by about 0.03 magnitude during the transit, or roughly 3 percent. Using software he wrote himself, Vanmunster monitored the progress of the transit in real time on his computer.

Belgian amateur astronomer Tonny Vanmunster obtained this light curve of a faint star in Lyra. The 0.03-magnitude dip in the star's brightness is caused by a Jupiter-size planet crossing in front of the star's disk, an event known as a transit. The quality of data decreased near the end of the observing session because the star sunk close to the horizon. Click on the image to view a larger image.

"It looks like a beautiful light curve; the data looks great," adds David Charbonneau (Harvard-Smithsonian Center for Astrophysics), a coleader of the team that discovered TrES-1 with a 4-inch telescope. "I'm thrilled that this confirmation has come from an amateur. But perhaps we shouldn't be too surprised. He did, after all, have a telescope with an aperture three times larger than ours!" 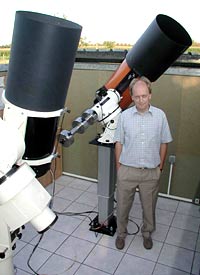 Belgian amateur astronomer Tonny Vanmunster, seen here in his private observatory, detected the exoplanet TrES-1 as it transited its host star. He has also detected the transit of another exoplanet, HD 209458b. Besides his exoplanet work, he observes cataclysmic variables and supernovae.

"It is a pleasant feeling to know that this exoplanet had not yet been observed before by any amateur, and is only the second one ever seen by an amateur," says Vanmunster.

The previous transiting exoplanet seen by amateurs, the hot Jupiter HD 209458b, was first recorded by Finnish astronomers in September 2000 — a full 10 months after professionals detected its transits. Vanmunster says his attempt to observe the transit was triggered by last week's TrES-1 article on SkyandTelescope.com, and in particular, the prediction by TrES-1 codiscoverer Timothy Brown that it would not take amateurs nearly as long to detect TrES-1 transits.

A total of six transiting exoplanets are known, one of which was confirmed earlier this week. Unlike GSC 02652–01324 and HD 209458, which are relatively close to the Sun, the other four known stars being transited by exoplanets are roughly 5,000 light-years from Earth, and are therefore much fainter and harder to observe. 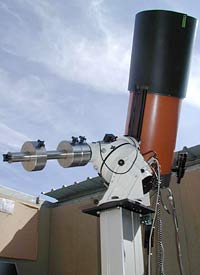 While amateurs can quickly follow-up professional exoplanet transit detections, they will have a difficult time discovering an exoplanet for themselves. The problem stems from that fact that only 1 percent of solar-type stars have hot Jupiters, and only 10 percent of these planets will have orbital inclinations that will cause them to transit their parent star. Making prospects bleaker, Charbonneau points out that at least half of all stars in a given field of view are significantly larger than the Sun, so a transiting planet would block such a small percentage of the star's disk that it would be almost impossible to detect. "An individual amateur would have to monitor several thousand stars to have a realistic chance of catching a transit," says Charbonneau. But it's not impossible.

If an amateur were to discover a transiting-planet candidate, professionals would have to follow up to make sure the transit was, in fact, caused by a planetary-mass object. Eclipsing binary stars, for example, can mimic the signature of a transiting exoplanet. A more realistic possibility is for an amateur to be the first to detect the transit of a planet discovered by professionals from the gravitational wobble induced on its host star. "That would be big news," says Charbonneau.