Chalk up another important discovery for amateur astronomers. In late January, Austrian amateur Matthias Kronberger discovered a planetary nebula in Lyra, close to the western edge of Cygnus. Aptly baptized Kronberger 61, or Kn 61 for short, this nebula was recently confirmed and photographed using the 8.1-m Gemini North Telescope atop Mauna Kea in Hawaii. 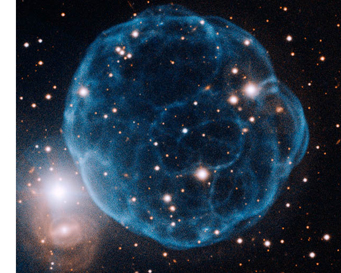 Gemini Observatory image of Kronberger 61 showing the ionized shell of expelled gas resembling a soccer ball. The light of the nebula is primarily due to ionized oxygen (oxygen-III) emission and its central star can be seen as the slightly bluer star very close to the center of the nebula.

Kronberger is a member of an amateur group called Deep Sky Hunters, which is collaborating with professionals to search for previously unidentified objects in the archives of the Digitized Sky Survey (DSS), a compilation of several night-sky atlases.

Kronberger hunts for planetary nebulae by creating false-color composites of the DSS images and scanning them for blue-green wispy objects. His discovery is one of 50 made by the group.

Three of these detections, including Kn 61, fall within the gaze of NASA’s planet-hunting scope, Kepler, which has been roped in to provide data for a study on planetary-nebula shapes. The scientific team led by Orsola de Marco (Macquarie University, Australia) and George Jacoby (Giant Magellanic Telescope Corp.) is particularly interested in the role played by planets and companion stars in shaping planetary nebulae.

Planetary nebulae were first discovered visually using simple telescopes in the 18th century. Their apparent likeness to the outer planets in these early observations deceived William Herschel into coining the name. But later astronomers realized that planetary nebulae have nothing to do with planets. They are instead giant puffs of gas expelled by geriatric medium-size stars. The star’s shrunken core continues to energize the expanding shell of gas, causing it to glow.

A large number of planetary nebulae are perfectly spherical or elliptical, corresponding to the shape of the star that generated them. But others, such as the Cat’s Eye Nebula and Hourglass Nebula, have complex shapes. Some scientists think that the gravitational influence of companion stars or planets might have played a role in producing these unique shapes.

“Explaining the puffs left behind when medium-sized stars like our Sun expel their last breaths is a source of heated debate among astronomers, especially the part that companions might play,” says De Marco, an expert on planetaries. “It literally keeps us up at night!” 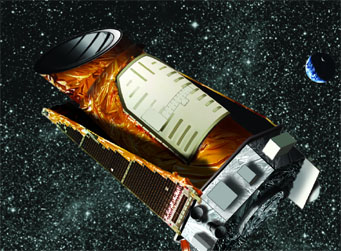 An artist's impression of the Kepler spacecraft, which is basically a wide-field photometer fed by a 38-inch (0.95-cm) telescope.

Scientists think that Kepler will help them detect planets, brown dwarfs, or companion stars that might have shaped the dead stars’ gaseous sheaths. The space telescope’s primary purpose is to scan 105 square degrees in Cygnus and Lyra for exoplanets that cross (or transit) the face of their host stars, which causes a tiny but perceptible drop in brightness. Transiting objects cause dimming of light at regular intervals, and are confirmed after at least three consistent readings.

But Jacoby offers a caveat. “The transit likelihood is tiny — almost negligible in comparison because of the demanding geometric coincidence that is required,” he says, referring to the fact that the star, the transiting object, and Kepler have to be in the same plane for detection.

To overcome this obstacle, he says that the team also keeps a tab on any spikes in the brightness of the central star’s core. They hope to record light reflecting off a close companion. This method works particularly well for detecting companion stars.

“The variability we are looking for increases the likelihood [of detection] by a huge factor,” says Jacoby. “Overall, the non-transiting companions are much easier to detect this way as evidenced by our ability to see several of these with modest telescopes on the ground.”

Of these, Kn 61 serves a unique purpose. Its near-spherical shape indicates that the progenitor star likely does not have an influential companion. Any such detection will therefore help the scientists tweak their hypothesis.

Regardless of what Kepler might reveal, this recent discovery is yet another triumph for amateur-professional collaboration. This week Kn 61 is being featured in a symposium titled “Planetary Nebulae: An Eye to the Future,” in Puerto de la Cruz, Spain.

That's great to know how amateurs can still contribute when the professionals are busy doing their research work. Congratulations to Matthias Kronberger for the discovery and the professionals to allow him to collaborate with them for doing so.