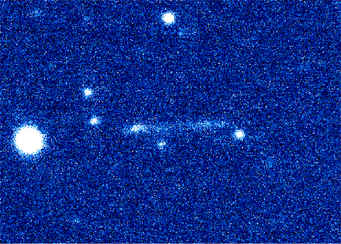 During Richard Miles's 30-second exposure, asteroid 2008 HJ made almost a full turn and varied greatly in brightness. There are peaks at each end of its trail (the left end being enhanced by a faint background star), and there's a clear brightness minimum in the middle.

When a tiny object called 2008 HJ flew past Earth last month, observations by British amateur astronomer Richard Miles showed it to be about 12 by 24 meters long (the size of a nice yacht), tumbling end over end as it hurtled by. More surprising is that it turned once every 42.7 seconds — 66 times faster than Seattle's Space Needle — making this the fastest-spinning natural body yet known in our solar system.

It's got to be a barren, stony mass, because any pebbles on its surface would be flung off into space. Each end of 2008 HJ turns at more than 200 times the escape velocity!

Miles, a past president of the British Astronomical Association, wasn't simply using his backyard observatory in Dorset for this find. He was logged on to the 2.0-meter (80-inch) Faulkes Telescope South at Siding Spring, Australia, via the Internet. This is one of two similar instruments operated by Cardiff University in a partnership with the Las Cumbres Observatory Global Telescope Network (LCOGTN) in Santa Barbara, California. LCOGTN was founded by Wayne Rosing, a former executive at Google.

These days, whenever a near-Earth object (NEO) is discovered, growing numbers of advanced amateurs swing into action to acquire repeated accurate positions (astrometry) of the body as it flies by — essential for learning about its orbit and future close encounters.

Miles measured 2008 HJ's brightness repeatedly during its
flyby on April 28th and 29th, then combined the results in
this plot, which assumes a 42.668-second rotation
period. The object has two similar peaks
during each rotation, suggesting it is oblong and tumbles
end over end. All magnitudes are adjusted to the asteroid's brightness if
it were one Earth-Sun distance from both the Sun and
the observer (with zero phase angle).

But instead of astrometry, Miles was going after something else: high-quality brightness measurements, which are clues to size, shape, and rotation rate. He belongs to a small group of amateurs and affiliated UK colleges involved with the Faulkes Telescope Project in a concerted effort to secure this type of data for newly discovered NEOs.

In fact, had he concentrated on positional measurements, he might not have noticed this object's rapid spin. "To do accurate astrometry, you have to avoid trailing the image too much," Miles comments, "so most folk doing astrometry would certainly miss detecting fast rotators." Shortly after 2008 HJ was discovered on April 25th with the LINEAR robotic survey telescope in Socorro, New Mexico, Miles suggested adding it to his group's photometric observing program. As it turned out, he was the only member to get images during the flyby on April 28th and 29th. The asteroid was visible for just a few days as it passed within three lunar distances of Earth.

"If you write this one up," Miles told me, "be prepared — we already have an interesting follow-up object that I am still working on!"