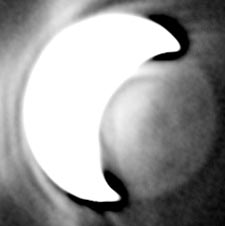 Near-infrared exposures were combined to reveal the first-ever amateur image of the surface of Venus. The photographer, Christophe Pellier, drastically overexposed the sunlit part of Venus to show the shadowed surface — making the bright crescent look much larger than it was.

In a first for amateur astronomy, backyard observer Christophe Pellier in Bruz, France, has captured images of the eternally cloud-shrouded surface of Venus.

Using a 14-inch Schmidt-Cassegrain telescope, a webcam, and a 1-micron infrared filter, Pellier imaged Venus's night side glowing right through the planet's clouds on May 12th, when Venus showed a 19-percent-illuminated crescent. He has taken several more images since then, stacking 100 eight-second exposures to make each one.

Pellier was not at all certain that his equipment would be up to the task, and he was surprised to see the glowing night side of Venus after just a few seconds. "It turned out to be much easier than expected," he says. "It's the proof that the best can come to anyone who is merely willing to try new things or difficult targets."

Pellier was responding to an early-May call by Sanjay Limaye (University of Wisconsin) to professional and amateur astronomers asking them to make coordinated observations of Venus in the near infrared.

The long exposures drastically overexpose the sunlit part of Venus, making it look much larger than its actual thin crescent. Despite this glare, about half of Venus's dark side is dimly visible. Venus' surface is hot enough to glow at 1 micron, and infrared light at this wavelength can emerge right through Venus' thick cloud cover.

The temperature of the surface varies with altitude, being less hot in more elevated regions, which show up as dark areas in the infrared images. A few dark splotches persist from night to night in Pellier's images, suggesting that they are high-elevation areas.

"There is a large dark spot — I suspect that's topography, I don't think that's atmosphere," says Limaye. He and Pellier are still trying to match the image features to maps of Venus' topography.

Pellier's feat is a first not only for amateur astronomy, but for astronomy in general. Professionals have imaged Venus's surface from the ground in infrared light, but not for extended periods of time. "What Christophe has done is provided the first long-term coverage of the night side," says Limaye. "Believe it or not, we don't have that."

Limaye next hopes to see infrared images of Venus's night side taken with a coronagraph to block the glare from the bright crescent. He thinks amateurs will be able to do this faster and cheaper than professionals will, due to the complexity of professional observatories and their nitrogen-cooled infrared cameras.