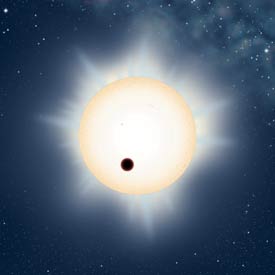 This artist conception depicts a Jupiter-size planet transiting its host star at a close distance, as is the case with TrES-1. Amateur astronomer observations suggest that the planet might be surrounded by a cloud or torus of particles.

S&T illustration by Steven A. Simpson.

Amateur astronomers may have discovered a ringlike structure around an extrasolar planet. The Hubble Space Telescope will reveal whether the observations and analysis represent a landmark discovery or an as-yet unexplained systematic error. But regardless of the outcome, the collaboration showcases the growing capabilities of amateurs to acquire and analyze high-quality data, form networks, and engage in cutting-edge research.

The planet — named TrES-1 — was discovered in Lyra by a team of professional astronomers led by Roi Alonso (Astrophysical Institute of the Canary Islands) and announced on August 24, 2004. The team was able to detect the planet with only a 4-inch telescope because it periodically crosses the disk of its host star, blocking about 2 percent of its light over the course of about 2.3 hours — an event known as a transit. Just eight days after the discovery announcement, European amateurs detected a TrES-1 transit. The planet orbits its star every 3.03 days at a distance of just 6 million kilometers (0.04 astronomical unit). It has roughly three-fourths the mass of Jupiter and a diameter about 8 percent greater than Jupiter's.

Over the next few weeks, dozens of amateurs in Europe and the United States recorded TrES-1 transits, which occur once per orbit with clocklike regularity. Many of these amateurs submitted their data to professional astronomers Aaron Price of the American Association of Variable Star Observers (AAVSO), and Greg Laughlin (University of California, Santa Cruz) and Tim Castellano (NASA/Ames Research Centers), who organized Transitsearch.org. Laughlin and Castellano are working with the AAVSO to form a global network of amateurs to observe exoplanet transits.

Finnish amateur astronomer Arto Oksanen acquired this light curve of a recent TrES-1 transit. Note the bumps before and after the transit. These bumps, which were seen in many previous observations, may signify some kind of cloud of reflecting particles near the planet, though this remains unconfirmed.

In late September, retired professional astronomer Bruce Gary in Arizona and amateur astronomer Joe Garlitz in Oregon noticed that TrES-1's 12th-magnitude host star apparently brightens shortly before and after each transit. Such effects had not been seen before in other transiting exoplanets. Postings on the Transitsearch.org Web site speculated whether these brightenings were caused by starlight reflecting off of rings, a moon, or dust clouds.

To investigate these possibilities, California amateur astronomer Ron Bissinger took up Laughlin's suggestion and performed a rigorous statistical analysis of the available data. Bissinger combined data from 34 transit observations recorded by professionals and amateurs, including his own. The observations were obtained between May 9 and October 11, 2004, from different longitudes, under different sky conditions, and with different telescopes and CCD cameras. Many of these observations showed brightenings of about 0.005 magnitude roughly 40 minutes before a transit begins and 40 minutes after it ends. Bissinger's analysis showed that it's highly unlikely that random effects caused the brightenings. 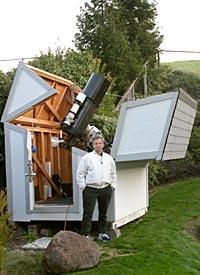 California-based amateur astronomer Ron Bissinger, shown here with his observatory, performed a statistical analysis of dozens of transit observations of exoplanet TrES-1. The observations hint at the existence of reflecting material around the planet.

"It's definitely a real signal that needs to be investigated; it's not random noise," says Price. "The question is whether it comes from an astrophysical source or from the process of making the observations." Price notes that the anomaly was seen in about half the observations, and particularly in those with the highest-quality data.

Laughlin does not dismiss the possibility that the anomalous brightenings are due to something inherent in the planet or star, but he thinks they probably result from an undetermined systematic effect caused by the way the data was acquired. "If I were pressed to place a bet, it would be something along those lines," he says. "It's remarkable that amateurs have gotten to the level of precision where they can see this minimal brightening, but it's most likely an instrumental effect."

If the brightenings turn out to be physically real, nobody knows what is causing them. Recent calculations show that moons and Saturn-like rings can now be ruled out. A moon would cause a dimming rather than a brightening. Rings could not survive for very long that close to a star because stellar radiation pressure would blow ring particles out of the system. According to Laughlin, the most plausible explanation is some kind of particle or dust cloud near the planet that scatters starlight. Perhaps TrES-1 is surrounded by a torus of ionized particles or dust that is analogous to the torus surrounding Jupiter, which is continually replenished by material ejected by Io's volcanoes. "The TrES-1 cloud would have to be very diffuse and spread out, trailing and leading the planet. It would look like the planet is spewing a cloud of confetti," says Laughlin. "The torus would be intensified by magnetic fields connecting the planet to the star."

This image from the Catalina Observatory shows sulfur ions that form a torus around Jupiter. The ions have been spewed into space by Io's volcanos. It's possible that a similar structure exists around the transiting exoplanet TrES-1.

But even Bissinger expresses caution: "I'm extremely reluctant to say anything is in the TrES-1 data. We need to confirm this and go through another exercise; there's a lot more work we can do." Bissinger, whose paper has been accepted for publication in the refereed Journal of the AAVSO, is planning to perform further statistical analyses to see if the effect is real.

On November 19th, a team of professional astronomers led by Timothy Brown (National Center for Atmospheric Research) observed a TrES-1 transit with the Hubble Space Telescope, and future observations have been scheduled. Brown and his colleagues are currently analyzing the data — a process that will probably take several months. "The HST observations will be definitive," says Laughlin. "If there's something going on, Hubble will show it for sure." 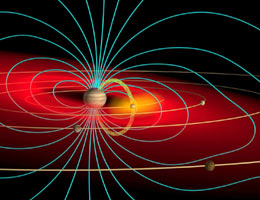 Astronomer John R. Spencer created this computer artwork of the Jupiter system. The Io plasma torus is shown as a red doughnut circling the planet.

Even if the Hubble Space Telescope fails to confirm the anomalies, this episode shows that modern amateur astronomers have the technology and skills to make exciting discoveries. "Fifty or 60 years ago, amateurs could contribute significantly to astronomy," says Bissinger. "But in the 1970s and 80s, the technology of big glass put the professionals so far ahead that amateurs couldn't really contribute. In the mid 1990s, with the advent of CCDs and computerized scopes, amateurs have now leapt forward and can certainly contribute again."

Laughlin and Castellano have taken advantage of this growing capability. Working with the AAVSO, they have organized a global network of amateurs to observe stars that are known to have planets to see if these planets transit. Right now, an amateur network is observing the stars HD 37605 and HD 74126 to see if their known planets will transit sometime in the next one to two weeks. Even if neither planet transits its star, Laughlin says it is inevitable that amateurs will discover transiting exoplanets in the next few years, and not just confirm transits detected by professionals. "Sorting out these TrES-1 anomalies will help," he says, "and it will give us confidence in a detection when it does happen."

"This is a good example of how amateurs and professionals are now working as team members, as opposed to an advisor-advisee mentality," adds Price. "The amateurs didn't have to write an observing proposal to do the TrES-1 observations. Nobody even requested it. The amateurs organized it themselves. They are showing initiative."

"There aren't many areas left where an amateur can contribute to science," says Bissinger. "That's what sets astronomy apart. With good observational techniques and equipment that is readily available in shopping malls, you can still make meaningful contributions."