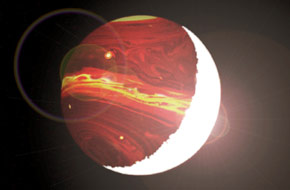 This illustration of a hot Jupiter, by exoplanet researcher Gregory Laughlin, attempts to be "at least marginally scientifically accurate," he says. The planet's night side is so hot that it glows from dull red to orange-hot, depending on how deep we see between its expected rock-dust clouds. The side lit by its nearby sun, by comparison, is dazzlingly brilliant.

An international network of astronomers has announced one of the most impressive discoveries ever made that involves amateurs. The group has found an extrasolar planet that crosses the face of its host star, an event known as a transit. Better yet, this object is unlike any of the 28 other known transiting exoplanets, and follow-up observations will yield precious insights into the diversity of planets throughout our galaxy.

The planet orbits the 8th-magnitude Sun-like star HD 17156, located 250 light-years away in northern Cassiopeia. It smashes not one, but two records for transiting exoplanets. It goes around its star every 21.2 days, much longer than the previous record holder at 5.66 days. It also has by far the most highly elongated orbit, with an eccentricity of 0.67.

“This planet is definitely a major breakthrough,” says Greg Laughlin (University of California, Santa Cruz), who organizes the Transitsearch.org network that made the discovery. “It's our first discovery of a transit. And the planet, with its long period and high eccentricity, is unique within the current census of transiting planets.”

“This is a fantastic, historic discovery,” adds exoplanet researcher Sara Seager (MIT), who was not involved in the discovery. “First, this discovery enables us to study a planet very different than the 'normal' hot Jupiters, almost all of which are on circular orbits less than 4 days. This discovery is also historic because amateurs helped detect the transits.”

Using the traditional gravitational “wobble” method, a team led by Debra Fischer (San Francisco State University) first discovered the planet earlier this year. To find out whether it transits its star, Laughlin organized an international campaign to observe HD 17156. On the night of September 9–10, Italian amateur astronomers Daniele Gasparri and Claudio Lopresti used modest commercial telescopes and SBIG CCD cameras to catch the initial telltale dip in starlight caused by the planet passing in front of the star and blocking some of its light. They were unable to observe the entire transit, however, due to the arrival of clouds over central Italy.

David Charbonneau (Harvard-Smithsonian Center for Astrophysics) led the effort to observe the next transit, which took place on the night of September 30 – October 1. Several professional astronomers in the United States, and California amateur Don Davies, observed the transit at exactly the predicted time, confirming the discovery.

Based on the planet’s gravitational tug on its host star, it has a mass of 3.1 Jupiters. Based on the amount of starlight it blocks, it has a diameter of about 1.15 Jupiters. Theorists can breathe a sigh of relief, because the calculated average density of roughly 2.6 grams per cubic centimeter (2.6 times the density of water) is in line with theoretical predictions for a gas-giant planet of such high mass. In contrast, about 30% of the known hot Jupiters are puffed up well beyond expectations.

“The professional community will lavish attention on this star because of the planet’s properties,” says Charbonneau. “But they are able to do so because of the huge contribution of these amateurs.”

“The elongated orbit leads to a 26-fold orbital variation in the amount of light received from the parent star,” says Laughlin. "It's being hauled in once per orbit to a scorching distance of only 7 stellar radii (0.05 astronomical unit), which leads to an intense phase of heating on the hemisphere that happens to be facing the star during the 12 hours of closest approach."

Future infrared observations by NASA’s Spitzer Space Telescope should be able to measure how the planet’s atmosphere responds to this burst of heating and how it radiates this energy. Spitzer cannot actually resolve the planet from its host star, but it can measure the system’s total heat radiation, which will change slightly as the planet swings in close to the star and gets blasted, and then cools off in its looping orbit. Besides the changing distance from the star, Spitzer will see both the day and night sides of the planet at different times, which will help theorists model atmospheric circulation. Information about the atmospheric properties, in turn, will be useful for creating global climate models for hot Jupiters in general.

“A 26-fold variation in the amount of radiation from the star during this planet's orbit means the planet will be alternately and dramatically heated and cooled by its host star,” adds Seager. The planet’s day side may vary between 1,330°C (2,420°F) and 430°C (800°F) during its orbit. How much of this heat carries over to the night side will tell much about its global winds, which are likely to be extreme.

Fischer’s colleague Geoff Marcy (University of California, Berkeley) says the team will continue observing the star’s wobble to refine the planet’s orbit. And repeated transit observations could reveal small timing variations caused by gravitational perturbations from other planets in the system.

Laughlin plans to continue his ongoing collaboration with amateurs. He concentrates on stars with known planets on long-period, eccentric orbits, and especially those whose planets would transit at the time they are closest to their host stars, which boosts the probability that they will actually transit as seen from Earth's viewpoint. Professionals rarely make the attempt to observe these potential transits because the probability is very low that that any given planet will orbit its star in a plane aligned closely enough to our line of sight. But with an eager core of skilled amateurs willing to tackle long-shot projects, and with dozens of additional potential targets on the waiting list, expect more discoveries in the months and years ahead.

The next HD 17156 transit will be visible from Hawaii on the night of October 21–22 (the first half of the transit will also be observable from the West Coast of the US). HD 17156 is located at right ascension 2h 49m 45s, declination +71° 45' 12". For more details and transit predictions, visit Transitsearch.org.