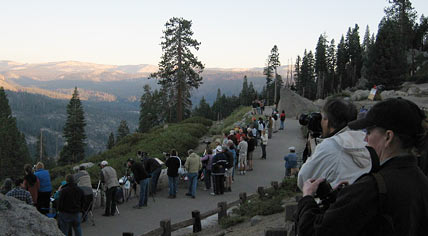 With the Sun setting behind them at Glacier Point in Yosemite National Park, photographers readied their cameras to record the predicted special moment.

Just before sunset on Thursday, September 15th, more than 200 photographers and a half dozen media crews (including one from Japan) converged on Yosemite National Park’s Glacier Point in California. What drew them there was a prediction in Sky & Telescope's October issue, page 40: At dusk that evening, a nearly full Moon would rise in the southeast over Gray Peak and Mount Starr King and show almost exactly the same phase and sky location as in Ansel Adams' famous photograph "Autumn Moon," taken 57 years earlier to the day. 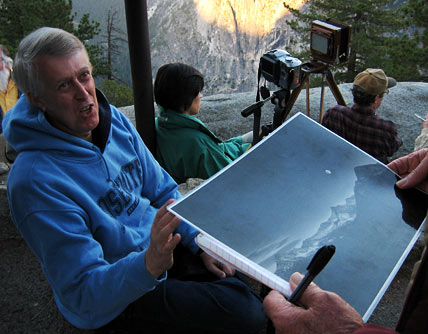 Shortly before sunset, with the Moon about to rise as it had in the original, Donald Olson explained the unusual photographic opportunity to a newspaper reporter. Author Roger Sinnott is in the hat at right.

The article's authors, Texas State University astronomers Donald W. Olson and Russell Doescher, along with Mitte Honors Program students Ashley Ralph and Kellie Beicker, were on hand for the rare encore performance. "It happens once every 19 years," Olson explained, "but first we had to work out the date of the original photograph, for which Ansel Adams gave various conflicting years. We also had to find the exact location of his camera, near what is called the Geology Hut." 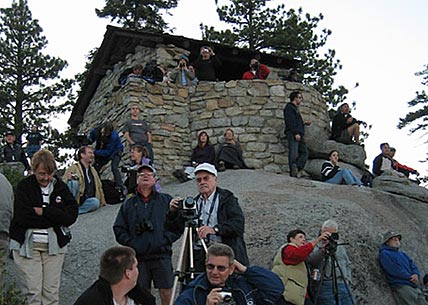 Located at the north end of the Glacier Point overlook is the Geology Hut, which became the hub of activity as the critical time neared. This spot was identified by the Olson team as the place where Ansel Adams set up his tripod in 1948.

Several photographers even showed up with giant view cameras, similar to the equipment Adams himself used.

At 6:50 p.m., Olson interrupted a newspaper interview to call out the start of a 4-minute interval when conditions for a repeat performance were optimal. Pellucid skies enabled the camera enthusiasts to experience the same magical low-Sun illumination that Adams had captured years earlier. But some won't know if they were successful until they get to their darkrooms back home.

"We do have lots of people showing up at Glacier Point for every full Moon," park ranger Dick Ewart explained. "But it's never been like this." Perhaps there will be a similar gathering on September 15, 2024, when the Sun and Moon will once again create the same memorable scene. 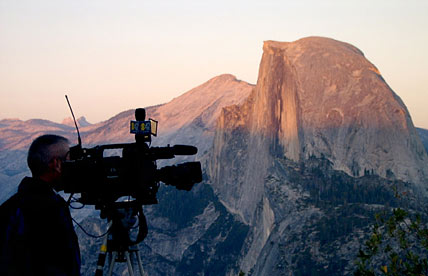 A cameraman from local TV Channel 47 was among those who photographed the scene. Behind him is Half Dome, the granite monolith that was the subject of several other Ansel Adams photographs. 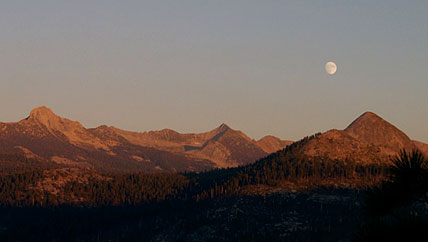 One of many who captured the memorable scene was Keri Comer of Irvine, California.