One highlight of the annual Northeast Astronomy Forum in Suffern, New York, is Tele Vue's factory-second sale. As attendees streamed into the exhibition hall at Rockland Community College, many headed straight for the Tele Vue booth, where they lined up to buy eyepieces and other telescope accessories at bargain prices.

Amateur astronomers converged on Suffern, New York, last weekend for the 12th annual Northeast Astronomy Forum and Telescope Show. The event, cosponsored by the Rockland Astronomy Club and Sky & Telescope, gave attendees an opportunity to see the latest in astronomical gear on display by almost 70 vendors. "We're very pleased with the event. Each year gives us the opportunity to expand and fine-tune," said NEAF organizer Ed Siemenn. "Attendance was strong."

Among the highlights of the weekend were keynote speakers Story Musgrave, an astronaut who gave a presentation about his adventures with the Hubble Space Telescope, and John Dobson, pioneer of the alt-az Dobsonian mount, who spoke about his personal theories of cosmology. Workshops were presented by CCD pioneer Richard Berry and planetary videographer Ron Dantowitz. 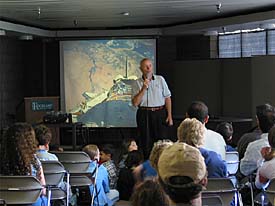 Astronaut Story Musgrave, a veteran of six Space Shuttle flights, was Sunday's keynote speaker at the Northeast Astronomy Forum. He described his role in the 1993 Hubble Space Telescope repair mission, which corrected the telescope's flawed optics, and used pictures, music, and poetry to share the visceral experience of space flight with a rapt audience of adults and children.

The festivities spilled outside the Rockland Community College exhibit hall as well. Attendees were treated to clear skies, giving them ample opportunity to soak in breathtaking views of the Sun through the various solar telescopes set up by Coronado Technology Group.

Many vendors used NEAF as an opportunity to debut new products. This year's highlights included many eyepieces such as Tele Vue's 41-millimeter Panoptic and newly shrunken 20-mm Nagler Type 5. Astrobuffet had a new 30-mm eyepiece that sports an 80° field of view, and Celestron displayed its complete product line of computerized telescope systems.