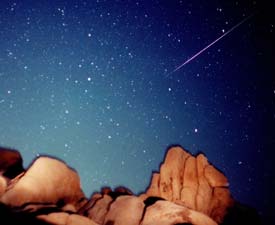 This image of a Perseid meteor was taken from Joshua Tree National Park in the California desert. The shooting star flew across the sky at around 4 a.m. on the morning of August 12th.

Now that the predicted peak of the Perseid meteor shower has passed, early reports from around the world suggest that the shower performed pretty much at its average rate. Many skywatchers in the eastern United States, however, were disappointed by summer haze that dimmed the view of the stars and hid most of the meteors.

George W. Gliba in Mathias, West Virginia, counted an average of 35 Perseids per hour on Monday morning from 2:10 to 5:10 a.m. Eastern Daylight Time. His sky was only moderately dark, with stars visible as faint as magnitude 5.9. This suggests that the shower's actual "zenithal hourly rate" at the time was around 80, its textbook average. The zenithal hourly rate (ZHR) is the number of meteors a single observer would see if the sky were dark enough for 6.5-magnitude stars to be visible, and if the shower's radiant (in northern Perseus) were at the zenith.

I myself counted only 23 Perseids during the hour from 2:46 to 3:46 a.m. EDT that morning. But stars were visible only as faint as magnitude 5.0, leading to a very rough ZHR value of about 100.

The Perseids continued on schedule the next night. During early morning hours Tuesday at his observing site in Great Britain, Robin Scagell of the Society for Popular Astronomy told local news media, "We've seen one every couple of minutes on average, which is about what we would expect for conditions here where the sky is not as dark as it might be out in the country."

A few hours later Wesley Stone made counts under a very dark, 6.6-magnitude sky in Oregon. However, he observed from 10:50 p.m. to 1:56 a.m. local time, when the Perseid radiant was lower in the sky. His counts of 50 and 51 Perseids during the last two hours of his watch translate into a ZHR of about 70.

The shower should remain active late tonight and for the next week or more, though with diminishing intensity. More news of this year's Perseids will appear in Sky & Telescope.