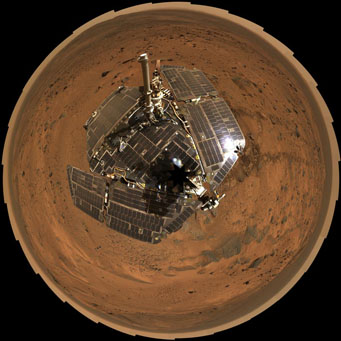 This bird's-eye view combines a self-portrait of the spacecraft deck and a panoramic mosaic of the Martian surface as viewed by NASA's Mars Exploration Rover Spirit.

It is with a bittersweet sense of both sadness and pride that NASA announced this week the official end of the mission for the Mars Exploration Rover Spirit. I've been the lead scientist for Spirit's stereo panoramic camera (Pancam) for more than a dozen years now, going back to when the cameras were first designed for a precursor mission that eventually became the twin Mars Exploration Rovers.

The Spirit team has seen the end coming since communications were lost with the rover in March 2010. Mission engineers made heroic efforts to reestablish contact, going through a huge list of potential "fault scenarios" and communications strategies. In the end, though, Spirit was conquered by the extremely cold Martian winter and its two broken wheels, which prevented its dusty solar panels from pointing toward the Sun.

But what a mission! Designed to last 90 days, Spirit kept going for more than six years, with the team driving the rover almost 5 miles (8 km) across rocky volcanic plains, climbing rugged ancient hills, and scurrying past giant sand-dune fields. It eventually spent most of the mission near the region known as Home Plate, which is full of layered, hydrated minerals. Data from the rover enabled dozens of scientific discoveries, but three stand out to me as most important: 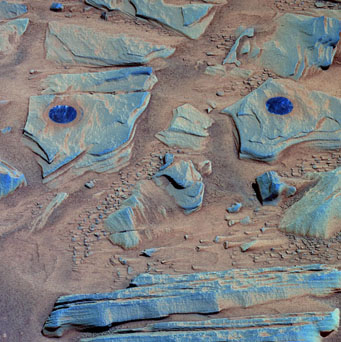 Hydrated sulfate and high-silica soils in the Columbia Hills and around Home Plate. These minerals, and the environment in which they occur (Home Plate is a circular-shaped, finely layered plateau that may be the eroded remains of a volcanic cone or other hydrothermal deposit), tell us that at some point in the past history of Gusev there was liquid water and there were heat sources — two key ingredients needed to consider the area habitable for life as we know it.

Carbonate minerals in some of the rocks within the Columbia Hills. Carbonates were expected on Mars, if indeed the climate was warmer and wetter in the past. However, their detection has been elusive so far, with only relatively minor occurrences found in the available mission data. Indeed, the Spirit team had to work hard to uncover the signature of carbonates years after the rover made the measurements. But the signal is there, and as the analysis continues the results for Mars in general could be profound.

An incredible diversity of rock types, from all over Mars, that Spirit was able to sample in Gusev crater. Some of the rocks appear to be from local volcanic lava flows or ash deposits. But others have likely been flung in to the area over time by distant impacts or volcanoes, and a few even appear to be meteorites, flung in from outer space. Spirit's instruments provided the team with the ability to recognize this amazing diversity, and thus to learn much more about Mars in general, not just Gusev in particular. 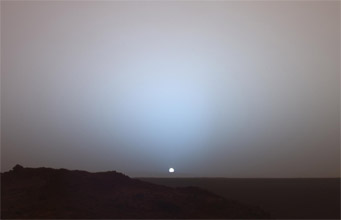 This sunset over Gusev Crater, taken in May 2005, is one of Spirit's most iconic images.

I have been incredibly proud of the role that Pancam has played in these discoveries. And there have also been numerous engineering "discoveries" made possible by Spirit's instruments — for example, teaching us how to drive a remote-controlled vehicle up loose, rubbly slopes from 150,000,000 miles away. By all accounts it was surely a rover's life well lived.

Spirit also helped us test an experiment: If we put all the rover's images out on the Web for everyone in the world to see, in near real-time, would people follow along? They did! Would our colleagues outside the team "scoop" us scientifically? Didn't happen. I believe that the experiment has been a great success, and a model for future planetary missions. I wonder if, maybe 10 or 15 years from now, I'll meet some young colleagues who were turned on to space exploration by being able to check out the latest Spirit images from Mars from their classroom, or living room, every day when they were a kid. That would be extremely satisfying — and a great testament to the power of openly sharing data from space exploration missions like Spirit's.

Meanwhile, on the other side of the planet, Opportunity continues to rove on, now just 2 miles from the edge of giant, city-size Endeavour crater, where orbital measurements have identified, for the first time in either rover's mission, the signatures of clay minerals in the crater's rim. Clays are also formed in water, but in less acidic, perhaps more life-friendly water than the sulfates that Opportunity has been mapping thus far. What will those clays look like on the ground? What will they help us learn about the ancient watery past and habitability of Mars? I can't wait to find out.

Spirit is now permanently at rest in a soft, salty sand trap next to the plateau of Home Plate. We don't know exactly how the rover died — maybe some solder joint cracked, or some frayed power wire finally broke free. Some think we may never learn what happened, but I think they're wrong. Some day, when people visit Mars and walk across Home Plate to take a look at our dusty piece of sweetly styled, late-20th-century space technology, they'll figure it out. And then I hope that Spirit's resting place will be protected and join the growing number of Interplanetary Historic Landing Sites scattered around our solar system — on Mars, the Moon, Venus, Eros, and Titan (and some day, Phobos, Deimos, other asteroids, and maybe even Europa and Enceladus) — as part of a fitting tribute to our species' never-ending Spirit of exploration.

Jim Bell is a planetary scientist and professor in the School of Earth and Space Exploration at Arizona State University. The lead scientist for the Spirit and Opportunity Pancam color cameras, he has written two books highlighting the rovers' photographic adventures: Postcards from Mars (Dutton, 2006), and Mars 3-D (Sterling, 2008). Click here to access a huge collection of high-resolution color images and panoramas from both rovers.

This is a truly sad scientific event. I have been following these two rovers since their inception and give a hearty "good job" to the team.

My hope is that we are not trying to find life on other planets to disprove God's great creation. And maybe God doesn't want you to know if He created other life.

Deuteronomy 29:29 "The secret things belong unto the LORD our God."

A truly amazing piece of scientific hardware, have enjoyed following the mission for years.

P.s. To Gary. How could finding life or fossils left by life on another planet have any theological implications? If God created life here, he could well have done so elsewhere. If life evolved all by itself here, it could well have done so elsewhere. So finding or not finding life on another planet proves or disproves nothing when it comes to creation.

A fitting, and fairly moving obituary for a remarkable vehicle. The "Free Spirit" effort was almost as interesting to follow as the mission itself. And what a mission! All associated with it should feel immensely proud. Kudos.

As most people who have followed our continuing exploration of Mars, from Sojourner through Spirit and Opportunity, I have been amazed,intrigued,fascinated and impressed by the technology and the people responsible for its creation and implementation. It is sad to lose such an important instrument of scientific research such as Spirit,but it's legacy will live on in our hearts and our history books for generations to come. Well done Spirit and crew!

I am 10 now and because of Spirits pictures I want to go there and rescue him. By the time I grow up we should be ready to go. Thanks to Spirit and all the programers, inventors and engineers we are learning to survive on Mars.