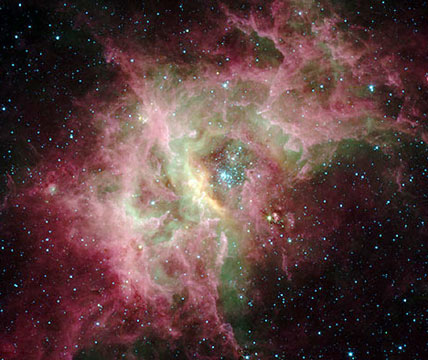 The huge nebula RCW 49 in Centaurus is one of the most prolific star-birth sites in the Milky Way. Largely obscured at visible wavelengths, it stands exposed in superb detail for the first time in this new infrared image from NASA's Spitzer Space Telescope. At least 300 of its 2,200 young stars show signs of being surrounded by protoplanetary disks. This image is composed of exposures made at four near- and mid-infrared wavelengths: 3.6 microns (shown blue), 4.5 microns (green), 5.8 microns (orange) and 8 microns (red).

In a huge nebula 14,000 light-years away in another arm of our galaxy, there float 300 newborn stars surrounded by dusty, planet-forming disks. Much closer by, a telltale gap in a similar circumstellar disk signals the likely presence of a remarkably young planet that has swept its immediate environment clear. These were among the discoveries announced yesterday at a NASA press conference highlighting new findings by the infrared Spitzer Space Telescope, which was launched last August. Trailing behind Earth in an orbit around the Sun, Spitzer has the most powerful and versatile dust-penetrating infrared vision of any telescope yet.

Dan Watson and William Forrest (University of Rochester) discovered the dust disk with spectral evidence of a gap in it around a star called CoKu Tau 4. The star lies in the Taurus-Auriga star-forming region 420 light-years from Earth. It is possible that the dust from the gap has merely coalesced into asteroids or has been cleared away through the force of radiation from the central star. But Watson said details of their observations make these explanations unlikely. "The planetary-formation scenario is the only one that really gives the degree of clearing that we see in the center of the disk, and the sharpness of the inner edge of the disk that we see in the data," he said.

More intriguing is the fact that CoKu Tau 4 is only a million years old, meaning the suspected planet would be even younger. "That probably makes it the youngest planet that we’ve ever seen — young enough that it really causes problems for the standard model of planetary formation," said Watson. That model says that giant planets form by accumulating a rocky core first, whose gravity then sucks in gas from the surrounding environment. The whole process is predicted to take several million years — too long to account for this case.

An alternative theory, called the disk instability model, says giant planets form more like stars do, when a pocket of gas and dust passes a threshold density, leading to a rapid, runaway collapse of material into a planet-mass clump. Disk instability would form a planet-mass clump in less than a few thousand years. The clump would take another 100,000 to 1 million years to settle down into a normal giant planet.

Present at the press conference was Alan Boss (Carnegie Institution of Washington), the originator of the disk-instability theory, looking pleased as punch at this observational boost for his maverick idea. He pointed out that disk instability would allow planets to form in the hot, erosive environments of vigorous star-forming regions, where powerful stellar winds and radiation might be death to slow-growing solar systems.

Watson and Forrest also detected the spectral signatures of frozen water, carbon dioxide, and methanol coating grains in the dust disks surrounding five other stars in the Taurus-Auriga Cloud, confirming what had been predicted by theory and hinted at by earlier observations.

In a separate Spitzer discovery, Ed Churchwell (University of Wisconsin) said his team is "incredibly excited" about the 300 stars harboring disks they’ve discovered in the nebula RCW 49 in the Sagittarius arm of the Milky Way. "No astronomers that I know could ever in their wildest dreams have expected to find a single region like this with so many stars currently in the process of being built," he said. This discovery will keep astronomers busy with follow-up observations of the new targets.