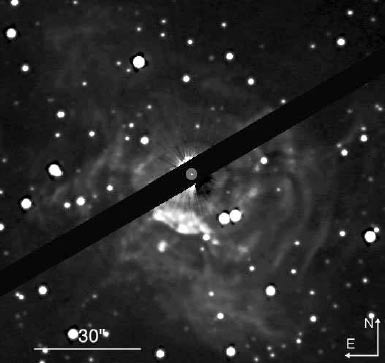 The bright Cepheid variable star RS Puppis (hidden behind a black occulting bar to block its glare) illuminates a dim reflection nebula around it. By seeing how long each brightness pulse from the star took to reach various blobs in the nebula, astronomers could find the true distances from the star to the blobs. That, combined with the angular star-to-blob separations on the sky, tells the distance from Earth — without relying on any other data or assumptions about the star itself.

For nearly a century now, astronomers have used Cepheid variable stars as "standard candles" whose apparent brightnesses tell how far away they are. Starting in 1912 Cepheids provided the first good distances to nearby galaxies. One of the reasons for building the Hubble Space Telescope was to measure Cepheids in galaxies farther out than could be done through Earth's fuzzy atmosphere.

Indeed, "Hubble" was something of a double-entendre. The name honored the late Edwin Hubble, but the telescope was also intended to pin down the Hubble constant — the expansion rate of the universe — by comparing the redshifts of key galaxies to their distances found using Cepheid variables.

However, this only works if you know the distances to local Cepheids in our own galaxy well enough to calibrate the Cepheid distance scale as a whole. They're rather unusual super giant stars, so none of them lie close enough to the solar system for really accurate parallax measurements of their distances. Accordingly, astronomers have been expending great efforts to deduce local Cepheids' distances accurately in any way they can.

The best such measurements recently attained an accuracy of just a few percent. Now a group of astronomers has broken that record — by using a unique method to get a range on the bright Cepheid RS Puppis good to about 1.4 percent.

They did it by measuring "light echoes" of the star's pulsations on a surrounding reflection nebula, combined with the star's accurately known pulsation period, the speed of light, and some simple geometry.

RS Puppis varies in brightness (from magnitude 6.5 to 7.6) every 41.4 days. It is 10 times more massive than the Sun, 200 times larger, and on average 15,000 times more luminous. Pierre Kervella and his colleagues used the European Southern Observatory's New Technology Telescope at La Silla, Chile, to record the faint reflections of these light pulses moving across the nebula. The speed at which they appeared to move, combined with the known speed of light, gave the distance to the nebula and star: 6,500 light years plus or minus 90.

RS Pup is the only Cepheid embedded in a large nebula. "Light that travels from the star to a dust grain to the telescope arrives a bit later than light that comes directly from the star to the telescope," explains Kervella. "As a consequence, if we measure the brightness of a particular, isolated dust blob in the nebula, we obtain a brightness curve that has the same shape as the variation of the Cepheid, but shifted in time." The delay is called a "light echo," by analogy with a sound echo off, say, a canyon wall.

"Knowing the distance to a Cepheid star with such an accuracy proves crucial to the calibration of the period-luminosity relation of this class of stars," says Kervella.

RS Pup is especially important because it's one of the longest-period nearby Cepheids, and few of these have been well measured. The new result should help firm up the entire cosmic distance scale.

Full details are in the team's paper.