There’s no doubt ancient astronomers were clever folk. Realizing Earth was round, estimating the Sun’s distance, discovering heliocentricity — it’s quite a list. But Brad Schaefer (Louisiana State University) suggested at the 2012 American Astronomical Society meeting in Austin that we should add another light bulb to the glow shining from history: ancient astronomers may have corrected for dimming caused by the atmosphere, centuries before anyone came up with a physical model for it.

This dimming is called atmospheric extinction. Extinction happens because starlight has to pass through Earth’s atmosphere in order to reach us. But the effect isn’t uniform: if you spend time stargazing you’ve probably noticed that a star high up in the sky’s dome looks brighter than it does as it slides toward the horizon. That’s because light coming to us from near the horizon passes through more atmosphere than if it shines straight down from overhead. (The Sun looks redder at sunset and sunrise for the same reason.)

Astronomers have catalogued stars’ magnitudes for at least two millennia, all the way back to an ancient document called the Almagest. It was the Almagest that Schaefer began with — but his goal wasn’t to determine if astronomers in olden days accounted for extinction. He wanted to use the brightnesses reported in it to decide a long-standing debate over who wrote the catalog in the first place, Hipparchus of Rhodes (circa 150 BC) or Ptolemy of Alexandria (circa AD 150).

Some researchers have looked at the positions reported for the Almagest’s 1,000-plus stars to try to distinguish between the theories, but the differences aren’t conclusive. So Schaefer decided to try using atmospheric extinction to crack the case. Rhodes is at 36° north latitude and Alexandria at 31.2° N, which means the same stars will appear lower in the sky (and therefore dimmer) in Rhodes than they will in Alexandria. The star Canopus, for instance, is by modern calculations the second brightest star in the sky, after Sirius. Canopus should have looked 4th or 5th magnitude to Hipparchus but 2nd magnitude to Ptolemy, Schaefer says. (Astronomers’ magnitude system is also ancient, based on Hipparchus’s work: a magnitude 1 star is 2.5 times brighter than a star of magnitude 2.) By comparing the Almagest brightnesses against modern magnitudes — which are extrapolated to how they would appear outside the atmosphere — Schaefer should have been able to tell by the growing difference between the two values where the observer was. But he soon discovered a problem. 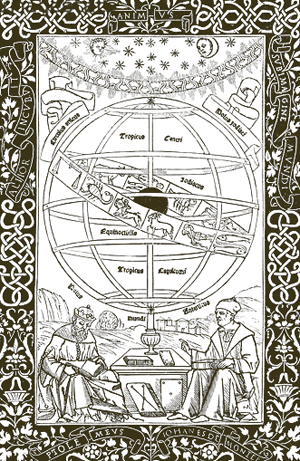 Frontispiece illustration from a Venetian 1496 edition of the Almagest, depicting Ptolemy instructing the 15th-century astronomer Regiomontanus (also known as Johannes MÃ¼ller von KÃ¶nigsberg). Above the men is the zodiac, encircling the celestial sphere.

The result has surprised many astronomers because there are no historical records mentioning extinction. The first physical explanation for extinction came in the 1700s from the French scientist Pierre Bouguer, and while extinction is obvious to an experienced observer, “it’s rather surprising that [the ancients] did a sophisticated and pretty accurate correction for something they don’t talk about and no one ever knew they knew about,” Schaefer says.

Several astronomers do remain skeptical and argue that scatter in the data may undermine Schaefer’s result. There's also the issue that no one knows how the ancient magnitudes were calculated, and other researchers have analyzed the Almagest brightnesses and not found extinction corrections. More than one astronomer said they want to see a detailed paper before deciding if Schaefer is right or wrong. Still, the overall consensus seems to be that “he’s onto something.”

How did the ancients do it? Not clear. Probably they watched stars that traversed large parts of the sky and determined how bright those stars appeared at different heights above the horizon. With those estimates in hand, they could eyeball stars that never rose very high and figure out how bright the stars really were based on their apparent magnitude and how far they were above the horizon. Schaefer says he did rough extinction calculations by eye while vacationing in the American Southwest that were pretty good. “It’s naked-eye backyard astronomy to the rescue of historical astronomy,” he laughs. Our readers are invited to try calculating for themselves.

A simple way that the ancients could have used to correct for extinction is somewhat analogous to star hopping to find an object. Suppose that a star near the zenith is catalogued as magnitude 2. It makes sense to compare that star's brightness with the brightnesses of nearby mag 2 stars in order to assess their brightnesses. Then those stars would be compared with stars close to them, and so on. This stepping would proceed from the zenith to stars that were only ever close to the horizon in small steps, which, allowing for the movement of stars in altitude, would gradually correct for extinction without the ancients being aware of the correction. This would explain why they never mentioned it.

As they were using their eyes, a good example would be Scheat and Enif, that are close in magnitude, and right now are at the same altitude from where I sit. They are, however, at quite different declinations; +28 for Scheat, and +10 for Enif. If I made a comparison between the two right now, and then waited until Enif rose to compare it with Sadalmelik, then I've extended comparisons at the same extinction over almost 30 degrees in declination. This would easily account for extinction even if I wasn't aware of it.

If the ancients corrected for extinction but never mentioned it, then the simplest explanation is that some aspect of human behavior led them to inadvertently adopt a procedure that led to the correction.  I am suggesting that the correction can be made by comparing stars at different declinations when they are at the same altitude.  This would require us to prefer horizontal comparisons to vertical ones.  This preference doesn't seem natural to modern astronomers who use telescopes that alter perspective, but I think it is more natural to people looking at the skies without any optical aids.  I am no behavioral psychologist, however many studies show differences between horizontal versus vertical visual perceptions, with horizontal visual stimuli favored. This may explain why most writing is horizontal and why we prefer vertical bar charts to horizontal ones, and also prefer to have the response variable on the y axis (both cases allow horizontal level comparisons).  A quick web search didn't find the definitive article, but many show the difference:

Well, during dusk and dawn the sun isn't that bright/hot either. It's a lot brighter/hotter when it's shining straight down. In retrospect, knowing that they may have calculated for extinction, it seems obvious. I mean the sun/moon changes in brightness, why shouldn't the stars? It'd be like writing down that the sun rises in the East and sets in the West, it's so obvious that it's sort of a waste of ink/time/space to bother saying it. Likewise, the stars get brighter as they go up. It just seems obvious now that Schaefer has pointed it out (kudos to him).

The fact is many ancient cultures were more advanced than heretofore believed. The ancient Greeks had knowledge of complex geared devices (Antikythera), the heliocentric system (Aristarchus of Samos) as well as medicine, mathematics, literature, and engineering capabilities that were all lost during the subsequent dark ages. Sumer, Akkad, Babylon, Harappa, Mohenjodaro, ancient Egypt, were similar great societies that declined to almost nomadic levels by the time of the dark ages. It was only with the renaissance that some of the knowledge has been rediscovered. The book “Lost Star of Myth and Time” suggests the cycle is celestial based (just as the much shorter cycle of the seasons is based on the earth’s positional motion relative to the sun). If there really is a larger cycle (perhaps based on solar system motion) then it is not surprising that the Ancients knew about the effects of atmospheric conditions on apparent stellar magnitudes.

Perhaps the extinction correction was not so significant before the atmosphere was loaded with pollution? I know some scattering is just from molecules in air, but it seems pollution must have some effect.

Another intriguing fact, when studying works of ancient astronomers, is the difference of color of some stars, according to the observer and the time of the observation, from antiquity, to medieval time, and to present.

This fact is mentioned in Camille Flammarion's book: "Les étoiles et les curiosités du ciel" (Stars and curiosities of sky", with some exemples and their sources.

This could be the subject of a future article in S&T, perhaps?

We modern people seem to think that because over the course of history humanity has developed more technology and recorded more facts that we are therefore smarter than our ancestors. Reading ancient philosophy and poetry quickly disabuses us of this conceit. Human beings are about as smart (and about as stupid) as we have always been. This is one area where students of the humanities generally have a big edge on scientists.