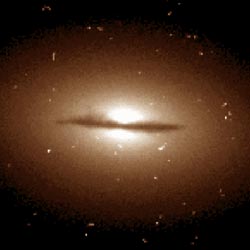 Deep in the heart of NGC 5322 is a central black hole of at least 100 million solar masses that could be the source of the mysterious ultra-high energy cosmic rays.

Point your backyard telescope in and around the bowl of the Big Dipper and you may find sources of the most energetic particles ever observed in nature. According to a team of astronomers led by Diego Torres (Princeton University), these ultra-high-energy cosmic rays (UHECRs) are produced by spinning supermassive black holes in relatively nearby giant elliptical galaxies. Four UHECR particles detected by a Japanese observatory seem to come from NGC 3610, NGC 3613, NGC 4589 and NGC 5322.

While accelerators on Earth can produce particles with energies up to a trillion electron volts (1 TeV), nature somehow succeeds in accelerating protons (hydrogen nuclei) to energies a hundred million times greater. The highest-energy cosmic ray on record packed a 2 x 10^20 electron volt wallop (200 million TeV) —­ as much energy in a single atomic particle as a baseball thrown at 50 miles per hour.

The fact that those particles arrive on Earth at all means they must originate within a few hundred million light-years; otherwise they would have lost energy by interacting with photons of cosmic microwave background radiation. Somewhere, extremely powerful particle accelerators must hide in the local universe.

Torres, together with Elihu Boldt, Timothy Hamilton and Michael Loewenstein (NASA/Goddard Space Flight Center), came up with a possible scenario involving spinning supermassive black holes in galaxy cores. The spinning hole would drag magnetic field lines through the gas around it, and this in turn would induce a super-strong electric field that could accelerate particles to the desired energies. However, says Boldt, the galaxy should not display any quasar-like activity, since interactions with the ambient quasar radiation would drain the particles of most of their energy.

As Boldt told a press conference on April 21st at the joint meeting of the American Physical Society and the High-Energy Division of the American Astronomical Society in Albuquerque, New Mexico, the team drafted a list of 12 candidate galaxies
known to be nearby and to harbor a "dormant" supermassive black hole. They then compared their list to the arrival directions of some 40 UHECRs, most of them observed by the Akeno Giant Air Shower Array (AGASA) detector west of Tokyo, Japan. To their delight, in four cases they found a match to within a degree or so. 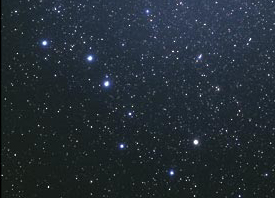 Four elliptical galaxies that may be a source of UHECRs are located in and around the Big Dipper. All four are visible through medium to large backyard telescopes. Click on image for the galaxy locations.

So what does this mean? The paths of charged particles are bent by magnetic fields, but this effect is smaller for more energetic particles. Yet, the Milky Way's field does deflect the paths a bit. Apparently, says Boldt, this effect happens to be small in the direction of the four galaxies, which are close together on the sky. Probably the effect is larger in the directions of other dormant quasars, which would explain why no matches have been found elsewhere.

Michael Cherry (Louisiana State University) says the result is "potentially very interesting," but he concedes that the statistics are not really compelling. "We need more events," he says. Unfortunately, only about one UHECR arrives per square kilometer per decade, so it may take a while before the dormant-quasar theory is confirmed or refuted. Future cosmic-ray detectors, like the Pierre Auger Observatory currently under construction in Argentina, are expected to finally solve the mystery.