Exoplanet research hit paydirt this week when a team of astronomers from Caltech, the University of California, Berkeley, and the Harvard-Smithsonian Center for Astrophysics announced its survey of the dense star-forming Orion Nebula. The researchers revealed that fewer than 10% of stars there have enough material in their protoplanetary disks to create Jupiter-size planets. The results agree — almost shockingly well — with other studies of how common gas giants are and raise the possibility that our solar system is an exception to the family rule. The paper will appear in the August 10th issue of the Astrophysical Journal. 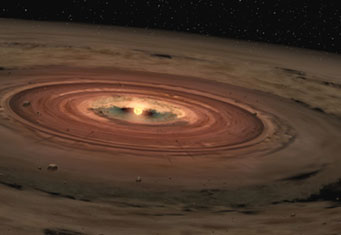 An artist's concept shows a very young star encircled by a disk of gas and dust. The material in this protoplanetary disk will eventually form rocky planets.

A mere million years old, the Orion Nebula Cluster packs 1,000 stars into the same volume of space that one star inhabits in the solar neighborhood. The Sun itself probably formed in a cluster like it, eventually straying away from its siblings over billions of years. The solar system coalesced from the leftover gas and dust in the Sun's surrounding disk, so finding such disks around young stars — like those in the Orion Nebula — indicates planets could be developing. As a typical stellar nursery, the cluster should help us understand star and planet formation as it occurs across the Milky Way, says the paper's lead author Joshua Eisner (UC Berkeley) in a prepared statement.

Using the new Combined Array for Research in Millimeter Astronomy (CARMA), Eisner and his colleagues observed more than 250 stars in Orion's central region and found that less than 8% had dust disks thought massive enough to create a Jupiter. The radiation from hot, massive stars in the cluster probably clears out a lot of surrounding material and keeps high-mass disks from forming, explains co-author John Carpenter (Caltech). In all, about 10% of the observed stars emit radiation associated with warm dust disks.

The results agree almost perfectly with findings by Geoff Marcy (UC Berkeley) and his colleagues, who conclude that about 10% of nearby stars have Jupiter-mass planets orbiting within 5 astronomical units (Jupiter's distance from the Sun). "This is an extraordinary moment in astronomy," Marcy says. Gas giants must form out of disks sufficiently massive to give birth to them, and "here we see that the numbers of such disks and of such planets agree."

The results do not mean, however, that only 10% of stars have planets. In fact, more than 10% of stars in Orion are known to possess disks massive enough to create a Saturn, and the average disk that the team found easily has enough material to make Neptune. CARMA isn't sensitive enough to detect the disks that would form smaller planets like super-Earths, but as Eisner explains, "With the average disk mass that we find, there seems to be adequate material there for terrestrial planet formation around a large percentage of stars."

How large is a "large percentage"? At least 80%, according to Marcy. Other studies conclude that at least that many stars have adequate disk material to form Earth-mass rocky planets.

So while few stars may have Jupiters, 8 out of 10 may have Earths — and there are maybe 100 billion stars in the Milky Way. Makes you feel small, doesn't it?

The preponderance of Earth-size planets would still not be promising for life, or at least highly evolved life, without a Jupiter around, if I understand current thinking correctly, since Jupiter's attractive force may have spared our planet even more bombardment from comets than it has received.