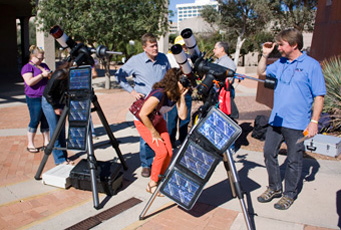 Astronomy enthusiasts descended on Tucson, Arizona, this past weekend for the second annual Arizona Science & Astronomy Expo (ASAE). The brainchild of organizer Alan Traino, ASAE is already on par with the biggest shows in the country, with more than 130 booths, displays, and activities for the whole family.

Stephen Ramsden and members of the Charlie Bates Solar Astronomy Project welcomed visitors with stunning views of the extremely active Sun through a multitude of solar telescopes and one spectrometer set up outside the Tucson Convention Center. And once inside, attendees viewed the newest tech and hands-on demos. 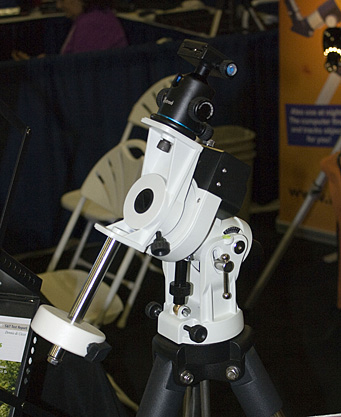 The small iOptron SkyGuider is a single-axis equatorial platform with a weight capacity of 2.5 kilograms when using a single camera.

I spent most of Saturday exploring the aisles and getting a close look at some new and interesting products. All the big names in astronomy toys were out in force, including Celestron, Meade, SkyWatcher, Tele Vue, and Vixen. iOptron unveiled two new mounts at the show. The small iOptron SkyGuider is a single-axis equatorial platform with a weight capacity of 2.5 kilograms (5.5 pounds) when using a single camera; it doubles to 5 kg when an additional camera mount replaces the counterweight shaft. The company also released its Center-balanced Equatorial Mount, the CEM60. This innovative design places the center of gravity directly above the altitude of the pier, greatly improving the stability of the equatorial design and allowing for a 27-kg weight capacity, a large load considering the mount’s modest size. 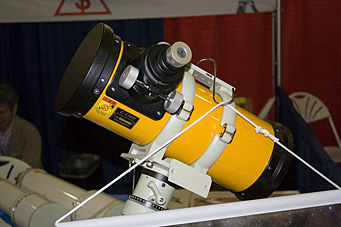 Some other new products that caught my eye included the Takahashi Epsilon 130D at the Texas Nautical booth, an update on the company’s famously fast 5-inch astrograph, and Stellarvue’s new SVG 100 APO, which features a corrected Petzval optical design that’s perfect for astrophotographers. Astronomics showed off its new truss-tube Astro-Tech 12RC, and Explore Scientific and Bresser had lots of scopes on display, including the ultra-portable 4-inch AR102S refractor. 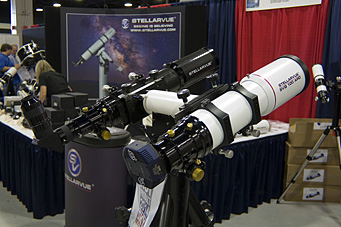 For the youngest attendees, plenty of hands-on demonstrations showed how comets get their tails and why the Moon has phases, as well as many other practical displays. And a space art exhibition organized by the International Association of Astronomical Artists greeted attendees outside the main hall, featuring masterful works by artists John Clark, Matthew Stricker, Michelle Rouch, and Simon Kregar Jr. Astrophotographer Sean Parker was also on hand, and TWAN photographer Wally Pacholka had an amazing display of his prints capturing some of the most breathtaking vistas on Earth. 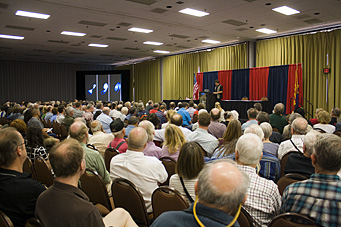