Late one night a couple of years ago I found myself in the Green building, the signature high rise that towers over the MIT campus in Cambridge, Massachusetts — where I was watching asteroids with Rick Binzel.

Binzel is a consummate asteroid lover. He has studied them for decades with a passion that reminds us there are many more worlds in the solar system than the eight or nine planets whose names we learned in elementary school. 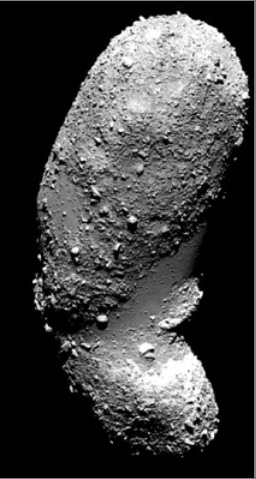 Near-Earth asteroids, like 25143 Itokawa (imaged here by Japan's Hayabusa spacecraft) might be nothing more than loose rubble piles that can be severely shaken up by close encounters with Earth.

The asteroids he showed me that night were nothing more than dim blips on a video screen. Our view was a live connection to NASA’s Infrared Telescope Facility on Mauna Kea in Hawaii, which Binzel uses remotely to study near-Earth asteroids (NEAs), small bodies that pass near — sometimes uncomfortably near — to our planet.

There are thousands of NEAs out there, silently parading by in the shadows. Binzel is motivated to study these wayward drifters because he finds their many puzzles and quirks utterly fascinating. They also have the potential to dramatically disrupt the course of life on Earth.

Now it appears the reverse is also true: According to the data Binzel has patiently gathered, Earth can disrupt asteroids, subtly or dramatically, if they get too near. Furthermore, this intriguing result helps resolve a decades-long meteorite mystery.

The news follows from a study published this week in the journal Nature, in which Binzel and several collaborators investigate the motion of 95 asteroids known to cross the orbits of Mars and Earth. Their objective was to look at the relationships between two classes of asteroids, S and Q, and their orbital characteristics.

For decades, planetary astronomers have classified asteroids by the spectral characteristics of their surfaces. "S types" are found throughout the asteroid belt and also comprise most NEAs. They are very slightly reddish in hue, which is thought to be the result of “space weathering.” Over time, solar-wind particles and space radiation damages and discolors the minerals sitting on the asteroid’s surface, giving them a somewhat sunburned look.

The new research puts some hard numbers behind the suggestion. It also helps tie up what has come to be known as the “ordinary-chondrite problem”. 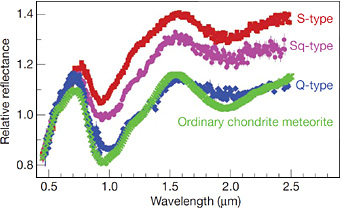 The spectral properties of a the Q-type asteroids match well with the ordinary chondrites while the S-type asteroids are brighter at the red (right hand) end of the spectrum.

Ordinary chondrites are, by far, the most common kinds of meteorites found on Earth. Naively one would expect them to match the spectral properties of the dominant asteroid class, the S-types. Instead they match the Q-types. The favored explanation is that if you send a chunk of S-type asteroid plunging through Earth’s atmosphere, it’s stripped of its reddish tan and looks like a fresh asteroid once it plunks onto the ground. This idea received a big boost 10 years ago when the NEAR-Shoemaker asteroid mission found a mineralogical link between ordinary chondrites and the S-type asteroid 433 Eros.

Until now, the unresolved part of the meteorite-asteroid puzzle has been: so why are there Q-type asteroids?

The next step came in 2009 when Pierre Vernazza of the European Space Agency showed that asteroids can be reddened by the solar wind in less that one million years. Putting this all together, it’s possible to see why there are three kinds of asteroids in Binzel’s orbital analysis. Some asteroids that cross Earth’s orbit are in trajectories that will never bring them close to Earth itself. You would expect them to all be S-type, well-reddened by the solar wind, and so far that’s what Binzel’s group finds.

The remaining asteroids, 75 out of 95, are in orbits that could bring them very near Earth, closer than the Moon. Because of uncertainties in the simulation, it’s impossible to be sure if this has actually happened for any given object, but the inference is that the S-type asteroids in this group have not had a close encounter in the last million years. Meanwhile, the 20 Q-type asteroids in the sample are the ones that have had close encounters, so they’ve been sufficiently shaken up to lose their red color.

Exactly how the shaking up happens is still unknown, but the fact that it can happen at all supports the hypothesis that small NEA’s are not individual slabs of solid rock but piles of rubble that are easily jostled.

“It would seem to indicate that they’re loosely held together,” says Binzel. This opens up the tantalizing possibility that scientists could watch an asteroid switch from red to grey as it passes near Earth and experiences tidal stress from Earth’s gravity. Such an encounter is now projected for the S-type asteroid 99942 Apophis, which will pass within six times Earth’s radius in April 2029.

“My vision,” says Binzel, “is that we would have it all wired up and monitored so that we can listen to it creak and groan as it flies by.”

Perhaps the slow accordion-like stretch on Apophis will be enough to alter its surface, or perhaps the interaction will trigger landslides and other surface action that lead to it acquire a Q-type appearance. Either way, we have 19 years to prepare for this unprecedented opportunity.

In the meantime, Binzel will be watching up in the Green building at MIT, slowly accumulating data on the tiny and mysterious worlds that are, from time to time, our nearest neighbors in space.

Love it! Asteroids have always struck me as major solar system targets, because of variety and the lack of a deep gravity well (except for a few). Here we have a chance to go out and "kick the tires" on a small body. This is important since all planetary systems develop from the interaction of small bodies, and of course if we ever have to prevent a collision, whether they're solid or not is obviously important.

Rick, I remember you from the days you were an amateur and I was an amateur, both using Gunter's charts and both ALPO members.

Would the impact of a loose rubble pile be less damaging to life on Earth than that of a solid body?

An interesting question. One could expect a breakup like happened at Jupiter when it reaches 6 R.

Being a loose pile is not likely to change the impact behavior if the particles do not separate before reaching the atmosphere. Actual hard surface impacts are numerically treated as liquids because solids deform freely under the stress resulting from hyper-velocity impacts. Individual particles or one big rock would behave the same. If earth's gravity could disrupt the ball of particles before contacting the atmosphere, then the behavior would be different although the effect would have to be large enough to distribute the particles over a major section of the surface to reduce the effect. The comet impacts on Jupiter imply that the possible disrupt effects would be small since major pieces impacted on a body with considerably higher mass and gravity. A considerable amount of time is required to cause the particles to drift apart as happened with Comet Showmake-Levy. It passed Jupiter 2 years before the impact (http://www2.jpl.nasa.gov/sl9/background.html) which caused it to fragment and the pieces drifted apart.