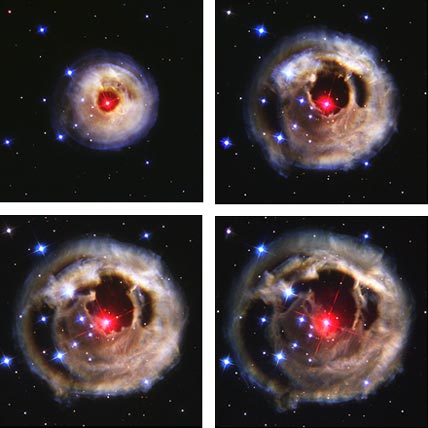 A wave of light sweeps outward from an erupting star to illuminate surrounding gas and dust in this eight-month-long sequence of images. A team of astronomers led by Howard E. Bond (Space Telescope Science Institute) used the Hubble Space Telescope’s newest and best camera, the Advanced Camera for Surveys (ACS), to take this extraordinary time-lapse series. The four frames were captured on May 20, September 2, October 28, and December 17, 2002.

Each frame is about 8 light-years wide at the nebula's distance of some 20,000 light-years. Nothing is actually moving; the apparent faster-than-light expansion stems merely from the geometry of the light echo. The group’s analysis of the images appears in the March 27th Nature.

For more information see our January article about these pictures. Full-resolution images and animations are available from the Space Telescope Science Institute, which operates Hubble.