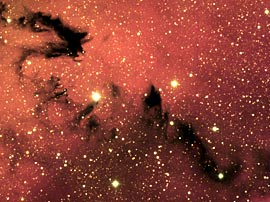 Famous nebulae such as the North America (NGC 7000) and Swan (M17) nebulae look more or less like the objects they are named after. In keeping with that tradition, astronomers might consider assigning the moniker "the Dragon Nebula" to NGC 6559 in Sagittarius. As shown in this image from the 8-meter Gemini South Telescope in Chile, the string of cold, dark dust clouds silhouetted against it bears an eerie similarity to a Chinese dragon.

Starting from its head at upper left, the "Dragon" winds across about 7 light-years of interstellar space. The much larger glow of NGC 6559 itself highlights a star-forming region about 5,000 light-years from Earth, in the direction of the galactic center. The Lagoon Nebula (M8) appears less than 1° away.

The view was obtained on July 10th. It combines four images taken through blue, green, yellow, and red filters. It covers a field of view 5.5 by 4.1 arcminutes across. North is to the left.