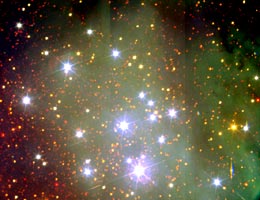 On September 1st the Southern African Large Telescope (SALT) — the largest single telescope in the Southern Hemisphere — recorded its first light from the stars. Modeled after the Hobby-Eberly Telescope at McDonald Observatory in western Texas, SALT's hexagonal 10-by-11-meter mirror consists of 91 hexagonal segments and has an effective aperture of 10 meters. The support structure is fixed in altitude, limiting the telescope's declination coverage but also its cost to just $18 million. The telescope is located at an elevation of 1,800 meters (5,900 feet) in an extremely dark location near Sutherland, South Africa, on the edge of the Kalahari Desert.

SALT's CCD camera is capable of taking beautiful images, such as the one of NGC 6530 shown here. But the observatory is optimized for cutting-edge spectroscopy. With its giant eye, SALT is poised to study objects ranging from nearby stars to distant quasars. Eric M. Wilcots of the University of Wisconsin, one of SALT's 11 international partners, notes that South Africa is making a bold statement by investing heavily in the observatory: "SALT is meant to showcase the capability of South African scientists and engineers, and it has done that."