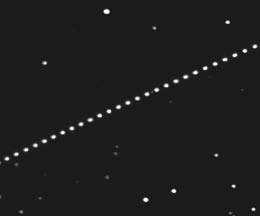 The night sky is full of visible Earth satellites; you can often count half a dozen creeping across the stars in the hour after dark, just by keeping watch with your unaided eyes. But rare indeed is the interplanetary spacecraft that's visible from Earth.

On March 4th, following publicity by the European Space Agency (ESA), many telescope users succeeded in spotting and tracking the ESA's Rosetta probe as it flew by Earth. An example is shown here. The spacecraft brightened to 8th or 9th magnitude. In the coming years it will make two more flybys of Earth, and one of Mars, to gain the velocity needed to match orbits with Comet 67P/Churyumov-Gerasimenko in 2014. It will go into orbit around the nucleus of the comet and drop a probe to land on its surface.