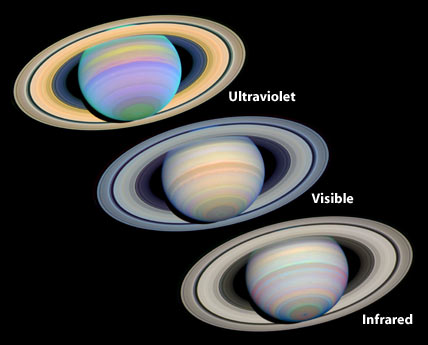 Catching Saturn during its extreme axial tilt last March, astronomers using the Hubble Space Telescope obtained some of the best multicolor images ever taken of the ringed planet. Like Earth, Saturn is tilted with respect to the Sun over its 29.5 year orbit. This allows observers to watch as the planet experiences fluctuating atmospheric conditions thoughout the Saturnian year.

Planetary scientist Erich Karkoschka (University of Arizona) captured Saturn's south side during maximum tilt, 27°, using Hubble's Wide Field Planetary Camera 2. The instrument used 30 separate filters to obtain spectral data ranging throughout the infrared, visual, and ultraviolet wavelengths. When combined, these data become a valuable tool for understanding the chemical compositions of different layers of Saturn's upper atmosphere. For example, smaller aerosols are detectable only in ultraviolet wavelengths, while methane gas shows clearly through infrared and visible light. In a press release Karkoschka said, "The set of 30 selected filters may be the best spectral coverage of Saturn observations ever obtained."