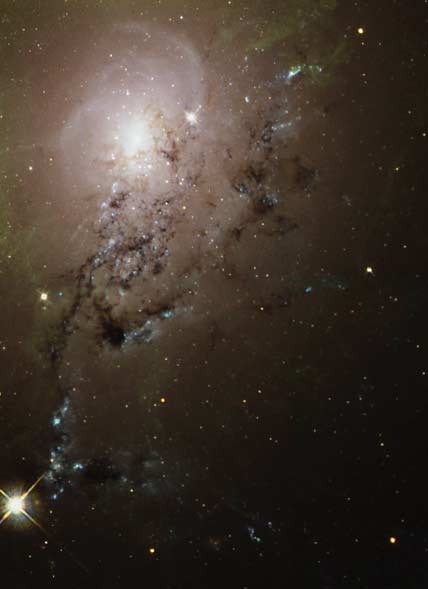 Sometimes you can stare and stare at something and never quite see what's there. But if you're part of NASA's Hubble Heritage Team, you can use Hubble's resources to make the picture clear. That's exactly what happened with this famous galaxy NGC 1275, also known as the radio source Perseus A.

What we're seeing is a dusty spiral galaxy colliding edgewise into a giant elliptical at more than 2,600 kilometers per second (six million miles per hour). The galaxy seen in the foreground is an edge-on spiral system with dark, dusty lanes and areas of bright blue star formation. Beyond these shadowy arms are the spiral's bright nucleus and dramatic, wispy regions of a giant elliptical galaxy.

The galactic collision causes gas and dust to swirl toward the center of the giant elliptical and feed a massive black hole there, causing X-ray and radio emissions. Not only does this image support the theory of strong interactions between these two galaxies, and possibly even a few smaller galaxies, but it also verifies the formation of new stars and large star clusters.

Blue and red images taken by Hubble's Wide Field Planetary Camera 2 in 1995 were combined with follow-up images taken at infrared wavelengths in 2001 to create this nearly true-color, 57,000 light-year wide scene.