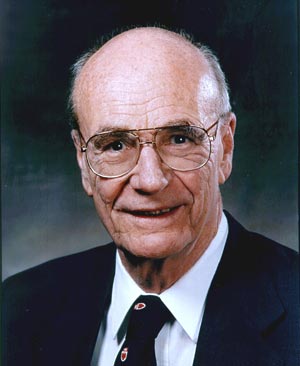 Donald E. Osterbrock, one of the leading American astronomers and astronomical historians of the 20th century, died on January 11, 2007, at age 82.

Osterbrock was a professor emeritus of astronomy and astrophysics at the University of California, Santa Cruz. Although he officially retired in 1992, he was still working on many projects and mentoring graduate students. He suffered a massive heart attack while walking across the university campus last Thursday. His death comes as a complete surprise and great shock to his family and friends.

He was "one of the world's most important and influential astronomers during the latter half of the 20th century," said George Blumenthal, acting chancellor of UC Santa Cruz.

Osterbrock, known affectionately as "Don" to his many colleagues and friends worldwide, was born on July 13, 1924, and raised in Cincinnati, Ohio. Don's interest in astronomy was encouraged by his father, an engineering professor, and dated from an early age when he visited the storied Cinncinati Observatory, which had been founded by Ormsby McKnight Mitchel, one of the historical astronomical figures occupying Don's thoughts at the time of his death.

Don attended the University of Chicago under the G.I. bill during the 1940s. He earned his B.S. and M.S. in physics before heading to Yerkes Observatory in 1949 to begin work toward his Ph.D. His thesis supervisor was Subramanyan Chandrasekhar, who later won the Nobel Prize in physics. Of Chandra, Don wrote: "All the graduate students who worked with him felt they had learned much from him, and had been fortunate to have been his students. A few thought of him as a god; most recognized him as an exceptional human being." Chandra's influence is apparent in Don's early work as a theorist — he computed one of the first successful models of red-dwarf stars, introducing the concept of convective envelopes.

Apart from Chandra, who was the outstanding theoretical astronomer of the day and a master of quantitative modeling of stellar atmospheres, the person who influenced Don most during his Yerkes years was William W. Morgan, an observer and leading expert on stellar classification. Morgan's methods were sometimes criticized as being "qualitative," and one critic even accused him of being "a celestial botanist." Dimitri Mihalas, one of Morgan's later colleagues, said, "Chandra and Morgan were like two mountain peaks; there was a chasm between them, and everyone else fell somewhere in between." Osterbrock was remarkable in that he managed to bridge the methodological and personality gap between these two eminent astronomers and form close alliances with both of them.

When Don was a graduate student in his twenties, Morgan named him a coauthor in one of the outstanding achievements of 20th-century astronomy: the discovery of the Milky Way Galaxy's spiral structure. Don and Stewart Sharpless, one of Morgan's graduate students, obtained photographs of ionized-hydrogen regions of the Milky Way that contributed to Morgan's identification of the spiral arms. Don later wrote to Morgan: "Let me say that I have always felt a tremendous amount of gratitude to you for including Sharpless and myself as coauthors of that paper.... It was a very generous thing for you to do, and I believe that it had a lot to do with the early recognition I received in astronomy. I will never forget it."

Don married Irene Hansen, a native of Williams Bay who had worked as secretary to Morgan while Don was a graduate student at Yerkes; it was a very happy marriage for both of them. They had three children. After leaving Yerkes, Don moved to a postdoctoral fellowship at Princeton University and faculty positions at the California Institute of Technology (where he also served as an astronomer at Mt. Wilson Observatory) and the University of Wisconsin, Madison. He and Irene were happiest at Madison, whose small-town Midwestern appeal and liberal politics were congenial to both.

Nevertheless, Don was enticed to UC Santa Cruz in 1972, at a time when the Lick Observatory was involved in early planning for the giant reflectors that would eventually become the twin 10-meter Keck telescopes in Hawaii. Don served as Lick's director from 1973 to 1981. His research interests ranged from understanding the nature of ionized gas around hot stars to discovering new types of active galactic nuclei, and his graduate-level textbook — Astrophysics of Gaseous Nebulae and Active Galactic Nuclei, a standard reference for 30 years — was published in a completely revised edition in 2005.

Don once said that that it is more enjoyable to do a project than to run one. After he relinquished the high-pressure Lick directorship, he began devoting more and more of his time to the history of astronomy, which became his main focus after his retirement. Among his books, he published absorbing and well-informed accounts of heroic figures such as James Keeler, George Ellery Hale, George Willis Ritchey, and Walter Baade, as well as definitive histories of the the Lick and Yerkes Observatories for their centennial celebrations in 1988 and 1997, respectively. He felt strongly that astronomers should write their own histories, not leave them to professional historians.

Don was a great man, a perfect gentleman, a devoted friend, and a wise and generous resource on the history of astronomy. He will be very sorely missed.