Astronomers Zoom in on Solar Hairs

New observations with a rocket-launched imager reveal individual strands of plasma wound around each other in the Sun’s corona. 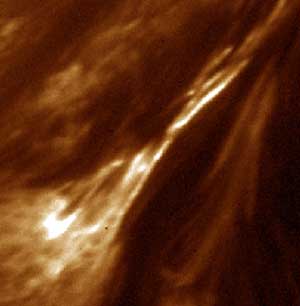 The High-resolution Coronal Imager (Hi-C) captured more than 50 16-Megapixel images of the solar corona using its 19.3-nanometer passband, which sees plasma at temperatures of 1.5 million kelvin. Click to see this image in context.

Astronomers have now effectively resolved the individual hairs on the Sun’s hot head, an achievement that might help them understand why that head is so hot in the first place. Using a new instrument called the High-resolution Coronal Imager (Hi-C) borne on a sounding rocket, Jonathan Cirtain (NASA Marshall Space Flight Center) and his colleagues took five minutes’ worth of images of the Sun’s outermost atmosphere, called the corona. The images’ resolution is 150 kilometers (93 miles), so fine that the pictures actually reveal individual strands of plasma in the corona.

In other words, these plasma structures are small.

Hi-C’s resolution is six times better than the AIA instrument aboard NASA’s Solar Dynamics Observatory, which heretofore had the highest-res view of the solar corona. Rocket flights such as Hi-C’s are an inexpensive way to demonstrate that new technology works before investing in a spacecraft to carry it, so the detection of such small structures are good for Hi-C as well as solar physics.

Astronomers want to see the corona in high-res because they don’t totally understand why it’s so hot. The Sun’s corona blazes at roughly 2 to 4 million kelvin (4 to 7 million degrees F), a hundred times hotter than the atmospheric layer below it, the chromosphere. The solar surface, called the photosphere, is a measly 5,800 kelvin. The likely culprit behind the corona’s superhot glow is the release of magnetic energy, but there are multiple ways for that to happen and researchers still don’t know which combination of processes is correct. 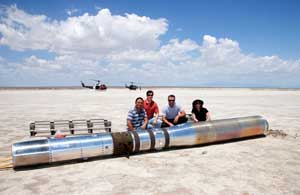 A contingent of the NASA team recovers the Hi-C payload from the New Mexico desert.

The plasma structures that Hi-C detected could be related to one of these ways. The structures twisted and changed during the five minutes of observation, and because the plasma follows magnetic field lines, scientists think the magnetic field is doing the same twisting and changing. Combining Hi-C’s superb resolution with observations by AIA and the Japanese Hinode spacecraft, the astronomers saw flares and spikes in temperature up to 7 million kelvin as the structures unwound themselves, the team reports in the January 24th Nature.

Twisted, curved magnetic field lines carry energy, explains Gert Botha (Northumbria University, England), who studies structures similar to those Hi-C detected. As long as the structure is stable, nothing happens. But the writhing field lines don’t want to be stable — like stretched rubber bands, they want to snap back into simple configurations. When they snap like this, a process called magnetic reconnection, the field lines break apart and reconnect with each other, releasing their pent-up energy to heat the surrounding gas.

Solar physicist Peter Cargill (Imperial College London) cautions that it isn’t clear the unwinding Hi-C sees is definitely heating the corona. “After all, it is ‘just’ five minutes of data,” he says. “The achievement documented here is to show that Hi-C works, and that, with a little more time, good science can be done.”

But Cirtain says that Hi-C’s direct detection of this unwinding-heating process is “an observational first in astrophysics.” He and his colleagues think the structures look like “magnetic braids,” ropes of field lines in which the different strands are interwoven with one another, like hair in a pigtail.

Researchers are split over whether the structures Hi-C detects are actually braids. Botha thinks the images show strands that are twisted as a unit, like what would happen if you took a bundle of strands and twirled one of the ends to wind all the strands together until they kinked in the middle.

The distinction between kinks and braids might seem esoteric, but braids researcher Antonia Wilmot-Smith (University of Dundee, Scotland) says it’s anything but. It’s not that braiding and twisting are competing theories — both release energy through reconnection, although braiding might be able to heat larger regions than kinks could, she notes. The point is that braiding is actually happening in the corona.

“No one has reported on direct observational evidence for braiding before,” Wilmot-Smith says. A lot of the theoretical work on reconnection-created coronal heating starts from the assumption of braided fields, reaching back to work in the 1980s by American astrophysicist Eugene Parker. “The theorists have always argued that braiding must be taking place on scales below the resolution of the current satellites — Hinode and SDO, et cetera. So for the Hi-C rocket to be the first with this good resolution and to find ubiquitous braiding on its short flight is really something.”

Be sure to check out the video of these structures — it's incredible. You can see the difference in resolution between the AIA images (left) and Hi-C images (right). The two sets were taken within a few seconds of each other. Credit: Jonathan Cirtain (NASA / MSFC)