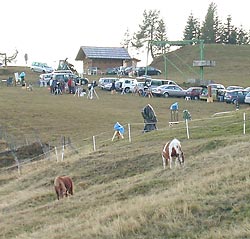 The horses in the foreground don't seem fazed by the steady onslaught of amateur astronomers arriving for the International Telescope Meeting held outside Greifenburg, Austria.

One of Europe's highest star parties took place on the weekend of September 26–29, on the 5,600-foot-high mountain slopes above the small town of Greifenburg, Austria. Known as the Internationales Teleskoptreffen, or ITT (International Telescope Meeting), the event was held at and around the Emberger Alm Hotel. In addition to providing excellent accommodation, the facility hosted lectures, exhibits, and a demonstration of optical testing with an interferometer.

This year was the ITT's 19th annual meeting and the 8th at this location. As its name implies, the star party drew 300 amateur telescope-making enthusiasts to the remote locale, and those who came weren't disappointed.

We were privileged with three successive clear nights — each with a visual limiting magnitude better than 6.5. Some of the experienced observers even detected the gegenschein, the faint glow in the sky located 180° from the Sun and caused by the backscattering of sunlight from the zodiacal dust. 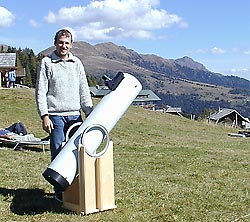 Meeting attendee Arndt Latusseck was one of the many participants who brought homemade telescopes to the star party. Shown here is his 8-inch Dobsonian-mounted Maksutov-Newtonian reflector.

Celestial highlights included the still-prominent Mars. But the clear air and dark skies allowed participants to hunt for deep-sky targets even with small instruments. Globular clusters, nebulae, and far-away galaxies were on many observing and CCD-imaging lists.

The star party was quite a local attraction. Some of the locals from the valley took their children up the eight-mile steep, winding road to introduce them to the wonders of the sky.