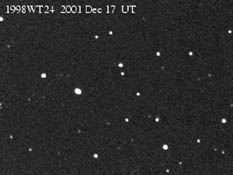 Using an elaborate searching setup, amateur astronomer Roy Tucker is hunting down asteroids like this one — 1998 WT24 — imaged on December 17, 2001, by Nick James in England. Click on image for animation.

An ingenious arrangement of three homebuilt 14-inch telescopes on fixed mountings is enabling Tucson-based amateur astronomer Roy Tucker to conduct a backyard hunt for asteroids whose quality is on par with the best professional searches in the world.

Tucker, an instrumentation engineer at the National Optical Astronomy Observatory (NOAO), completed his new telescope setup in April. The fixed mountings made the whole construction far less expensive than any telescope set up on a normal, steerable mount. Tucker's fixed telescopes, equipped with big CCDs, scan a strip of sky 0.8° wide as the Earth turns. Their images reach a limiting magnitude of 20.5 — fainter than most professional asteroid searches. And thanks to a cleverly designed bimetallic (steel and aluminum) framework that automatically compensates for temperature changes, the telescopes can run unattended all night with no need for focus adjustments.

The three telescopes take three images of the same sky area a short time apart. The three images can be compared to reveal any objects that moved between exposures. Tucker's system scans an impressive 12 square degrees of sky per hour and produces roughly 1 gigabyte of imagery per night.

Since his earlier searches began in 1998 (Sky & Telescope: March 1999, page 76), Tucker has detected 4,812 asteroids, several hundred of which were new discoveries. He presented his latest results in a poster at the Albuquerque meeting of the American Astronomical Society. Now, with the help of a nonprofit organization of amateur and professional astronomers called GNAT (Global Network of Astronomical Telescopes), he hopes to expand the system, which initially cost him just $12,000, into a globe-spanning network of 48 telescopes to provide 24-hour-a-day time coverage. GNAT is seeking involvement by universities, small colleges, schools, and serious amateurs. Such a network could make it possible not only to discover many more asteroids, but also to do precise photometric searches for supernovae, variable stars, and even extrasolar planet transits, says Tucker.

Roger Culver, an astronomer at Colorado State University and one of GNAT's organizers, says this is "a chance to really bring small telescopes back to the fore and really do some interesting things."