Beads on a Galaxy-Scale String

A new image from the Australia Telescope Compact Array reveals a spectacular series of knots strung along a jet. 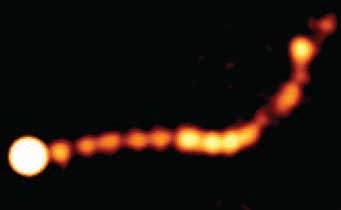 A string of almost-evenly spaced knots dots the jet shooting from the object PKS 0637–752.

Sometimes a beast can produce beauty. This image* shows bright knots in a powerful jet rocketing out of a distant supermassive black hole. The object, called PKS 0637–752, was the first observed by the Chandra X-ray Observatory when it launched in 1999 and was supposed to be a pointlike object the team could use to focus the telescope’s mirrors. Chandra instead revealed strong X-ray emission from the extended jet, kick-starting the study of such emission and its underlying physics.

The new image, taken by an international team using the Australia Telescope Compact Array, shows a series of brilliant knots along the jet. Trains of regularly spaced knots appear in other galaxies’ jets, but those sources usually only have three or four such knots. PKS 0637 has nine before the jet curves, covering several hundred thousand light-years in all. 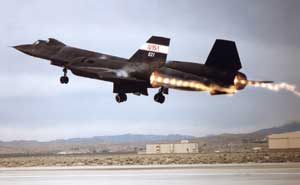 So-called "shock diamonds" appear in the afterburner of a NASA SR-71B jet as the exhaust and atmospheric pressures equalize. The pattern looks similar to knots in streams of superhot ionized gas shooting from some supermassive black holes, although astronomers don't know if the physics is the same.

Astronomers aren’t sure what causes these knots. One theory is that they’re similar to shock diamonds in jet plane exhaust. Shock diamonds form when the exhaust flow shooting out of the engine has a lower pressure than the surrounding atmosphere, which then causes the flow to contract, increase its pressure, and bounce back out again in a repeating pattern until the two pressures equalize.

For PKS 0637, the atmosphere would be the halo material surrounding the jet, implying the material is pretty uniform. It’s not clear how likely such uniformity is, but the model’s simplicity makes it attractive — plus, the jet power suggested by this interpretation is exactly what’s expected for this kind of source, says study coauthor Leith Godfrey (Curtin University, Australia).

Another option (one slightly more favored by the team), is that the swirling gas disk feeding the black hole is somehow unstable and feeds the beast at an irregular rate. One possible cause of instability would be a second supermassive black hole that sweeps down through the disk as it loops around the main object.