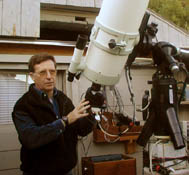 Public-school teacher and amateur astronomer Leonard L.
Amburgey of Fitchburg, Massachusetts, is receiving the Benson
Prize for his discovery of Earth-approaching asteroid 2000 NM. Established
by Space Development Corp. founder
James W. Benson in 1997, the award gives a cash prize of $500 for the
first 10 discoveries of near-Earth asteroids by amateurs.

Amburgey stumbled upon 2000 NM, an Apollo-class minor
planet, on July 2, 2000, during a routine observing session. Due to
an error in typing the coordinates of his target asteroid, he initially
missed his intended field in Serpens. He later returned to the correct
region of the sky just as the fast-moving 13th-magnitude interloper
was passing through.