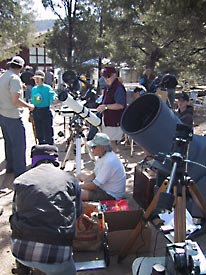 A slew of astronomers bought, sold, and traded telescopes and equipment at the annual RTMC swap meet.

This past weekend, more than 1,700 astronomers from the southern California region and beyond gathered in the mountains above Los Angeles for the 34th annual Riverside Telescope Makers Conference and Astronomy Expo (RTMC). The three-day event, begun by the Riverside Astronomical Society, is the largest star party in California. This year saw near record attendance in spite of a full Moon and a bleak weather prediction.

For many conference attendees, RTMC is all about equipment — both home built and commercially manufactured. This year's crop of amateur gear was impressive. Highlights included Gerry Logan's 16-inch Shafer Cassegrain, which won the merit award for outstanding craftsmanship in mechanics and optics, and Scott Rychovsky's 12.5-inch Dall-Kirkam Cassegrain. An unusual 4-inch f/345 solar scope brought to RTMC by Dwight Elvey also attracted a lot of attention. This instrument projected a 12-inch image of the Sun onto a screen 115 feet away by directing sunlight through a long-focus lens via a flat mirror. 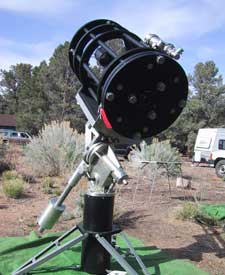 Among the highlights of the 2002 Riverside Telescope Makers Conference was the award-winning 16-inch Shafer Cassegrain telescope by Gerry Logan.

Numerous vendor booths also displayed an array of noteworthy equipment. Arizona-based Coronado Instruments offered passersby spectacular views of the Sun with a fleet of telescopes equipped with the company's hydrogen-alpha filters. In particular their new SolarSystem, a double-filter equipped TeleVue 102 refractor, attracted a lot of attention. Meanwhile, across the way, Jim Burr of Jim's Mobile Inc. demonstrated a prototype binocular scope consisting of twin 6-inch Newtonian tube assemblies featuring motorized focusing and interocular adjustment. The first units are anticipated to ship at the end of July.

The 2002 theme was Women in Astronomy, and the keynote address, given by Ed and Robin Krupp, addressed how women have molded and shaped astronomy over the centuries, from mythology to modern research. 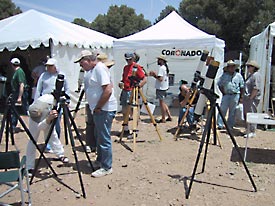 Vendors such as Coronado Instruments came to RTMC with a host of telescopes to show the crowd.

In recent years, the organizers of RTMC have made a special effort to make the conference a family affair. This year, while the auditorium was filled with lecturers, activities included archery, horseback riding, swimming, and a climbing wall. "We've taken our cues from Las Vegas," says Robert Stephens. "We are looking to attract young families. Our whole club is family oriented"

RTMC Executive Director Stephen Edberg concurs. "We are trying to stop the graying of the hobby." These efforts included the first ever full scholarship to the conference, given to a 15 year old student, and an invitation to 25 Boy and Girl Scout troops.

Next year's event is the 35th annual and takes place on the Memorial Day weekend, Friday, May 23rd, through Sunday, May 25th.