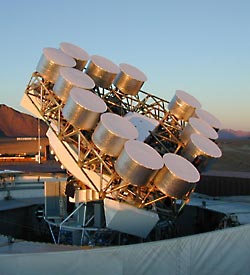 High in the Andes, the Cosmic Background Imager array is measuring the smallest ripples in the microwave background radiation from the Big Bang.

Astronomers on opposite sides of the world yesterday announced results from two experiments studying the cosmic microwave background radiation left over from the Big Bang. Both results firm up the grand picture that cosmologists have put together in just the last few years: that we live in a flat universe filled mostly with exotic dark matter and dark energy, and that the cosmos apparently went through a brief moment of extreme inflation in the first split second of its existence.

Many groups have been racing to map the weak microwave glow that fills the sky, using sensitive instruments on spacecraft, carried by balloons, and on high mountains. The microwave glow is a picture of the cosmos as it stood about 400,000 years after the Big Bang, when the cooling universe was still filled with white-hot gas that was just becoming transparent to its own radiation.

The gas was spread through space extremely smoothly — but not perfectly so. Imprinted in it were very slight irregularities that stemmed from the earliest moment of the Big Bang. These went on to grow into the galaxy clusters we see today. The sizes and strengths of the irregularities tell volumes about the universe's origin and contents. 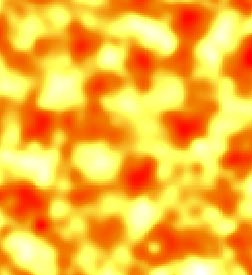 Ripples in the hot universe at age 300,000 years. This map by CBI covers a patch of sky 2½° square, about as much sky as a postage stamp covers at arm's length. The colors indicate slight temperature differences of only 1 part in 30,000. This is the sharpest and most sensitive image yet made of the 'surface of last scattering.'

On Thursday, two dozen cosmologists from Caltech and elsewhere announced results from the
Cosmic Background Imager (CBI) in the Andes. This instrument maps the smallest-scale irregularities of the background radiation, which have been poorly studied up to now. In six patches of sky about 2½° square, CBI imaged ripples as small as 7 arcminutes wide. Individual ripples about this size are the ancestors of today's galaxy clusters.

The goal of all such efforts is to plot the ripples' intensity spectrum, a graph showing their strength at each angular size. CBI's results fit right in with results from earlier studies where they overlapped. When combined with other data, the CBI results confirm that the universe is made of about 4 to 6 percent ordinary matter, about 25 percent exotic dark matter, and roughly 70 percent dark energy of some unknown kind.

Moreover, CBI found that all of these add up to just the total density needed to make space flat on cosmic scales, as predicted by the inflation theory. ("Flat space" is the familiar kind of space right around us — in which parallel straight lines, for instance, extend to infinity without diverging or coming together.)

In addition, CBI's ripple spectrum matches what would be expected if the irregularities began as tiny, subatomic quantum fluctuations in the earliest moment of the Big Bang, as inflation theory says they did.

Not to be outdone, on the same day researchers in England released early results from a microwave-background imager in the Canary Islands called the Very Small Array. During its first year of operation it mapped three patches of sky 8° wide with a resolution of 20 arcminutes. Its ripple maps are larger than CBI's but not as fine. They too confirm all the same details of what has now become the standard model of the cosmos.